The Longest Pleasure Pier in the World - Travel Guide 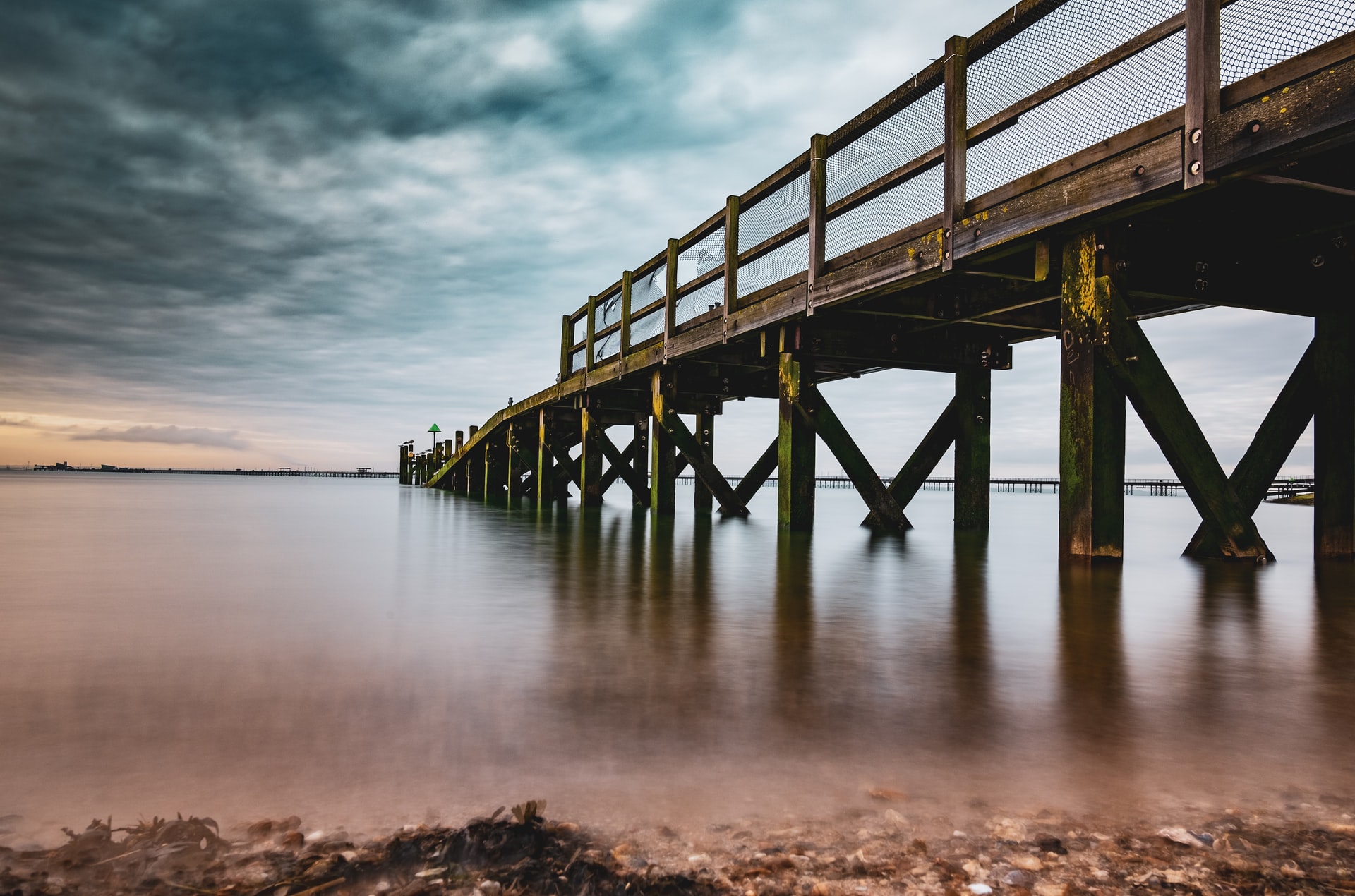 This is a Guest Post, contributed by Lee Griffiths, the Editor at Wrestling with Hotels. In addition to the photography provided by Lee, I have also utilised some stock photography.

Where is the Longest Pleasure Pier?

Spanning over 1.33 miles (2.14 km) into the Thames Estuary, Southend Pier is dubbed the longest pleasure pier in the world.

It’s a beautiful historical landmark and tourist attraction in the south-east of England and is famously quoted "The Pier is Southend, Southend is the Pier" Sir John Betjeman

A little bit of research on the History of the Pier will tell you, it was built in the early 1820s and took close to nearly 60 years to open to the public in late 1889. Most notably it was the first pier railway in the country. 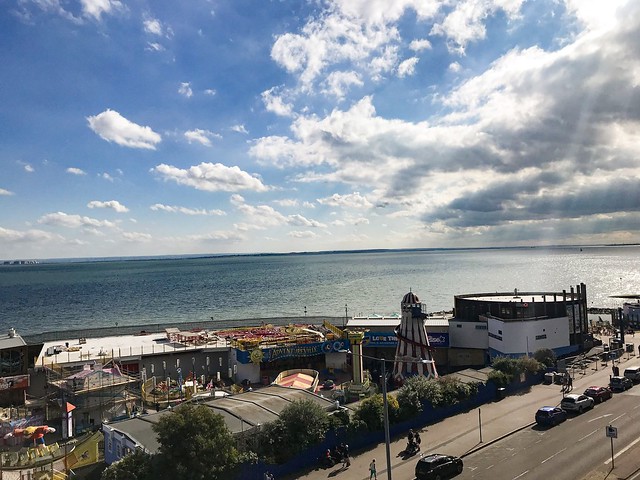 History of the Pier

The Pier played a role during both the first and second world war when during the latter the Pier was taken over by the Royal Navy and was renamed HMS Leigh, named after the marine estate a mile down the coast from the Pier.

Since the second world war, it has undergone tragedy and investment almost every decade ever since, with the latest and most notable being a fire on 9 October 2005, which severely damaged much of the Old Pier Head including the railway station, pub and retail units on the Pier itself. Much of the wooden planking was destroyed, but the main iron structure was largely undamaged, heat from the fire, however, was so intense that the Pier Railway tracks buckled. No evidence of this remains as the local authorities have invested handsomely to make this a great destination for tourists, day-trippers and holidaymakers alike. 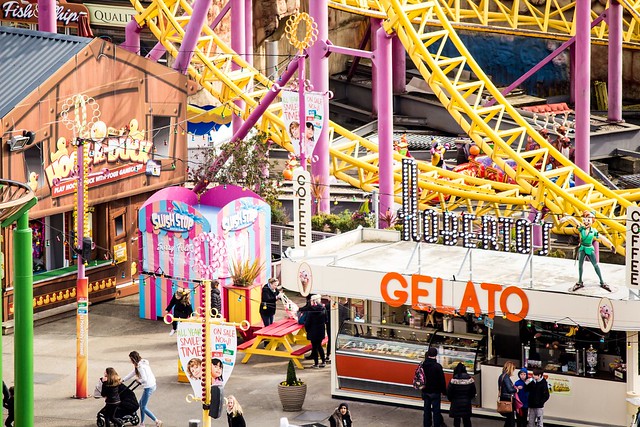 Why You Should Visit

One of the piers best features today is still that wonderful train chugging along the Pier delivering those who don't want to walk the 1.33 miles from start to finish.

My journey to Southend-On-Sea started way back in Rayleigh on the A127, a few miles away, on the main road into town and towards the now busy airport. Probably at this juncture, it's worth mentioning, the only reason I came to Southend was to walk the entire length of the Pier itself to try and order a pot of tea at the end in, as seen on channels 4, Jamie & Jimmy’s Cafe which sit over a 1 mile out to sea.

Once in Southend’s busy tourist centre nearing the Pier, you will notice ample parking, mostly paid parking but the majority is close to the seafront and places of interest. I parked very near to a water feature which was overlooked by guests of the Park Inn Hotel. 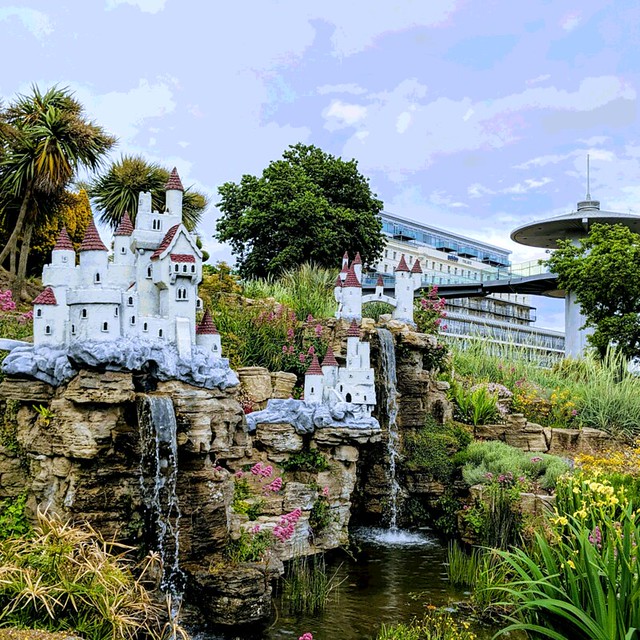 Only a small walk then takes you to the futuristic, borderline iconic entrance of the Pier where you can purchase your train ticket or for the first time see the long walk ahead.

As you enter it’s impossible to see the end, conversely, the town is a blur at the opposite end too. But you are greeted by the relatively new wooden planks of the Pier boardwalk with obvious signs of reclaimed timber and new timber positioned together, parallel with the infamous train track. 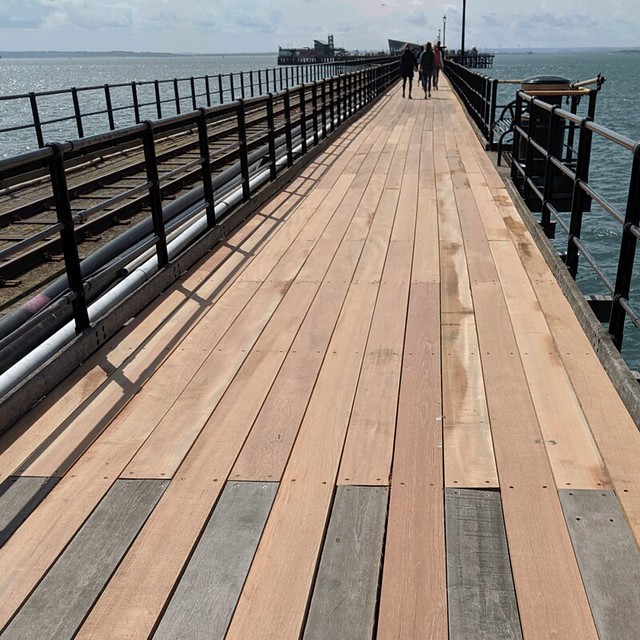 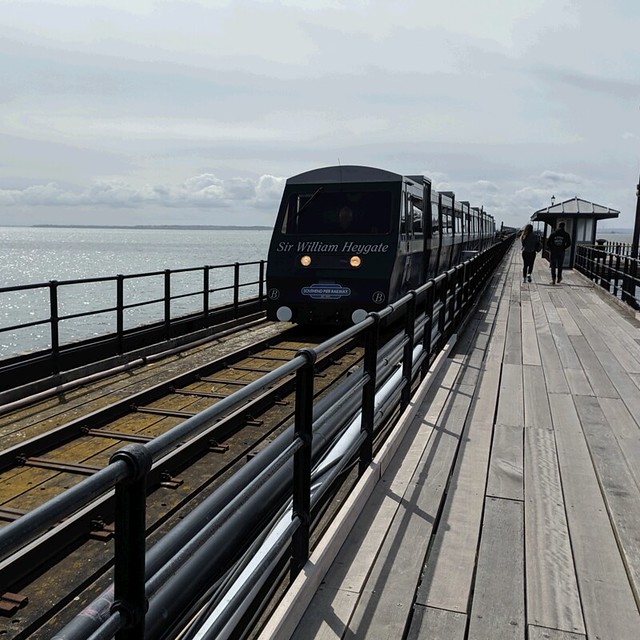 With shoes in hand, well on feet, it's now time to start the real pier journey, if you pick a day, in the warmer spring, summer months, as I did, groups of locals and tourists alike will also be strolling along and enjoying the Pier at the same time, taking in the view overlooking the Estuary.

As you stroll along, you will get handy little reminders of how far you have travelled, which are on historic blue circular signs. 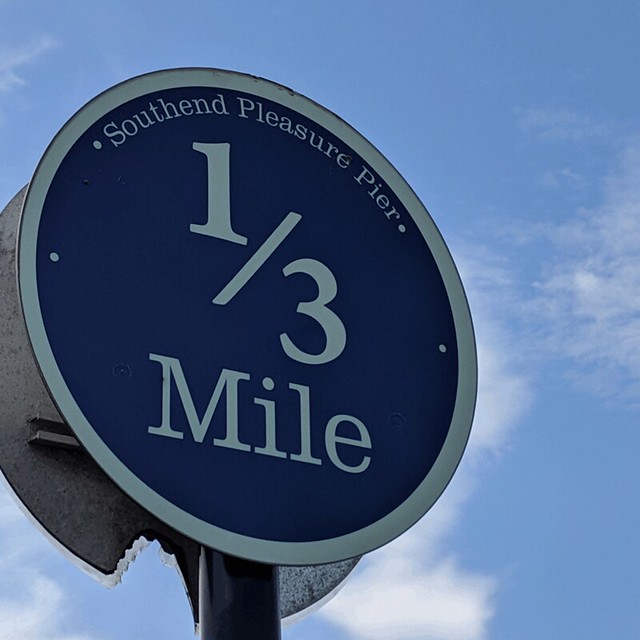 The further into the walk you get, the more you begin to notice the far end of the Pier houses the aforementioned cafe, tourist attractions, small stores and some beach huts which open up into small business units to buy trinkets, ice cream and locally designed merchandise. 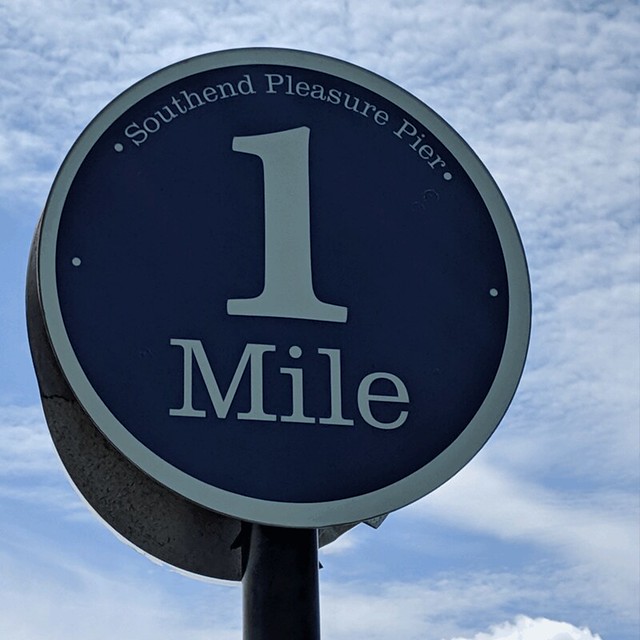 Looking back Southend is in the distance and the views are now spectacular across the water, I think I can see Kent or the at the very least the Isle of Sheppey from here, and in the not so distant view, sailing boats. 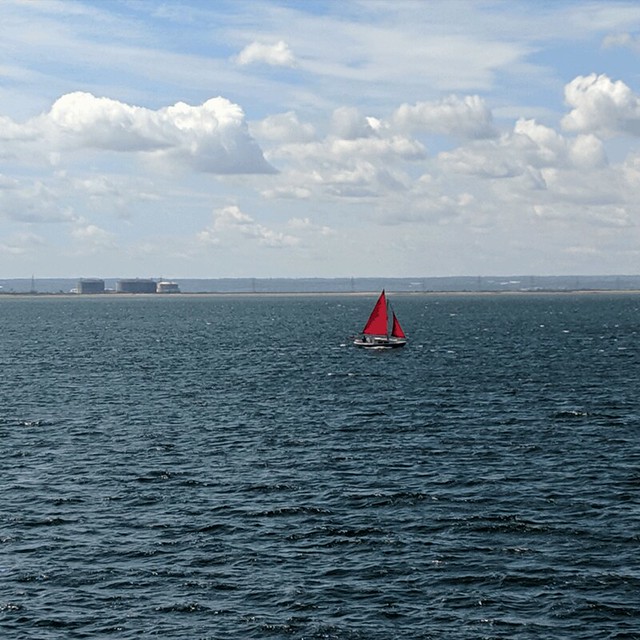 Much to my disappointment, the cafe was not open and I did not get the pot of tea I had set out for as you cannot actually eat in the cafe, it is purely for filming and you'd have to be pretty lucky to get a guest part.

But the closer you get to the end the more and more you see, the cafe itself, the wonderfully hand-painted beach huts and the pièce de résistance a sign congratulating you that you have reached the end! Although the new pub and viewing platforms are still yet to be seen, so only a few more steps to go. 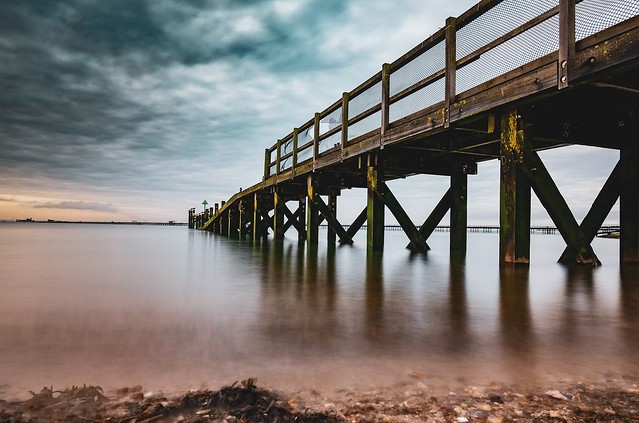 Even though I didn't manage to achieve my goal. What a journey. Honestly, what a thing to behold. Oh, but I did indulge in ice cream on my stroll back.

I didn't take a screenshot but be sure to open your phone and look at the map to see the GPS dot tell you, you are in the middle of the water, and try not to chuckle. 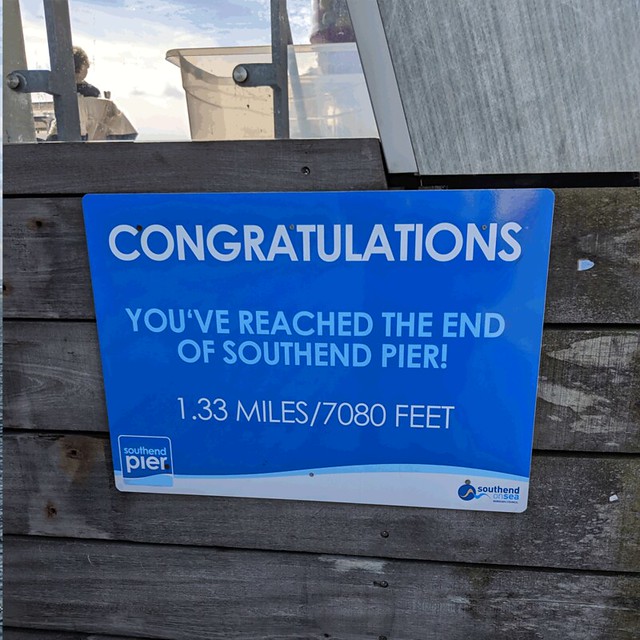 Pin It For Later 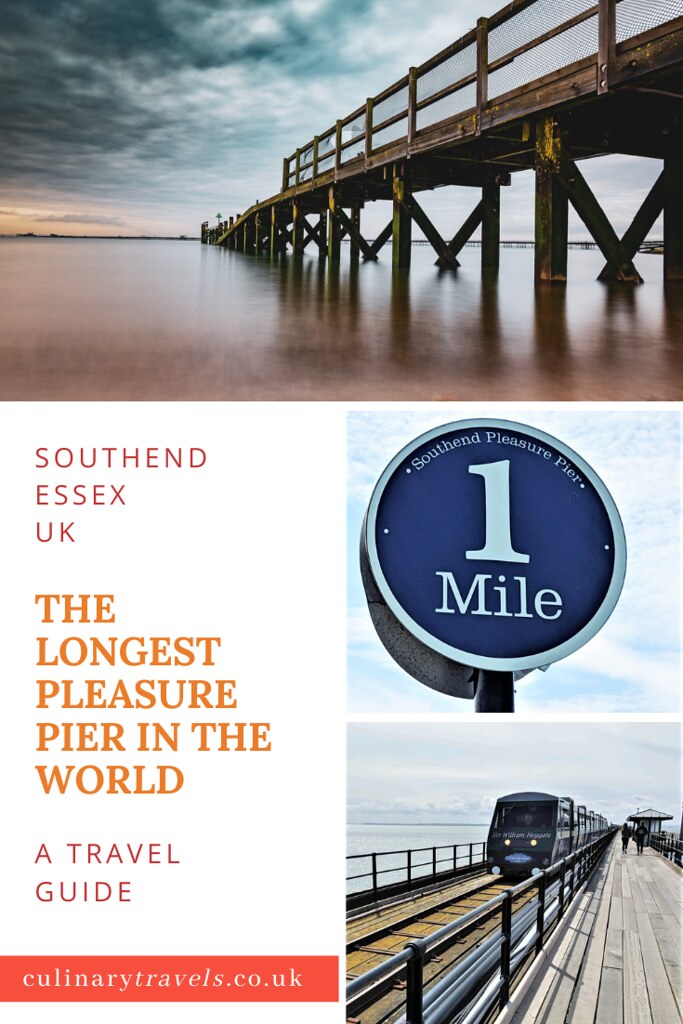 Work, Pleasure and a Full Stomach. Food and My Travels in the UAE (Guest Post)