Nothing quite screams Domestic Goddess (or even Kitchen Goddess, haha) like home made preserves does it? Maybe home made cheese might, but the sight of neatly labelled jars of home made jam does it for me. 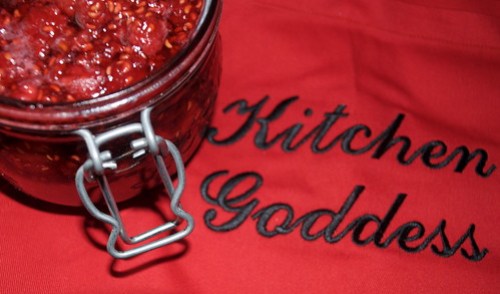 This is the best jam to start with as it doesn’t need any testing or temperature taking or indeed anything much: you just put the fruit and sugar, separately, into the oven and then, on mixing together, you’ve made your jam. (Nigella Lawson)

It was this description which lured me into trying out this recipe yesterday, not so much as the suitable for beginners part as I don’t consider myself to be a beginner at all by now, but, the not needing anything much part. I had to make some raspberry jam today but the idea of slaving over a preserving pan and hot stove just didn’t appeal, I just wasn’t feeling up to it.

Nigella’s delightful recipe for this lazy Goddess’s jam come from the kitchen essential that is How to Be a Domestic Goddess: Baking and the Art of Comfort Cooking

. This is the kind of book you can turn to when you’re in desperate need of a little culinary escapism, by that I mean time in the kitchen without the stress of worrying about complex recipes with a gazillion different stages; great food that brings out the Domestic Goddess in us all (most likely a sweet treat) without too much effort.

Handsfree Raspberry Jam certainly fits the above description easily, all it involves in putting some raspberries in one dish and sugar in another, heating in the oven (180C or the equivalent) for around 25 minutes and then combining them to form a molten ruby red river, before spooning into the waiting sterilised jars. You need equal quantities of fruit to sugar, I used a kilo of fruit and got a small Le Parfait jar and two standard jam jars worth.  The only thing I need to point out here is that the original recipe of Nigella’s uses regular caster sugar, I on the other hand used half golden caster sugar to half jam sugar as I was worried the jam wouldn’t set enough; this gave me a lovely soft set jam. If you can’t get hold of (or don’t want to use) jam sugar I’d be very tempted to add two lemons to the raspberries, juice them and add that to the fruit, then put the lemon halves and pips into a little muslin bag before placing in the fruit tray — it is the pips and skin that hold the pectin, i.e., the setting agent. 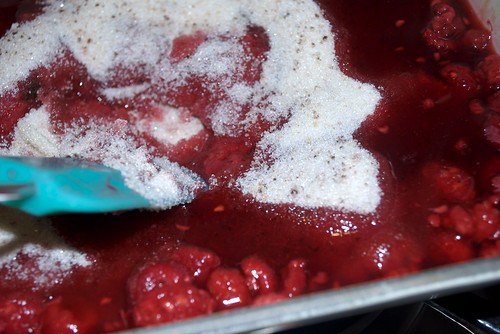 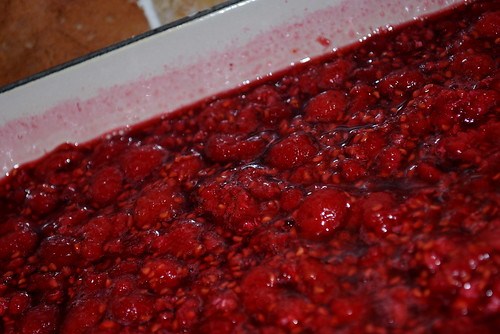 Even in its pre-potted state it looks gorgeous doesn’t it, Lovely chunks of whole berry in a ruby red syrup; if you wanted to I suppose you could squash some of the berries to get a smoother jam and even pass it through a sieve to get rid of the seeds but I think they add to the this jams rustic charm.

I used frozen berries as these wee delights are not in season yet and I refuse to buy the airfreighted, travelled round the world twice, kind that you can get in the supermarket, not only do I think them unethical, bad for the environment and utterly ridiculously priced but the flavour just cannot live up to the handpicked (or at least sent fresh from the farm in the organic fruit/vegetable box) variety. For most jams (in fact for most culinary uses) the berries can be used from frozen, in this case I’d defrost them first, making sure to keep all the juices, otherwise they won’t heat through at the same time as the sugar.

As the raspberries are not heated past boiling point they retain their fresh taste without being overly sweet, and are suited not just to spreading on bread/toast but are great for serving with ice cream, in cakes such as a Victoria Sponge and even on porridge.  I could just rather fancy eating a big dish of creamy porridge topped with a spoon of this scrumptious jam, a very healthy start to the day that would be too. I’d scrap all the lovely ideas for jam listed above though for just a mouthful of one of my Dad’s scones with some of this jam and clotted cream. 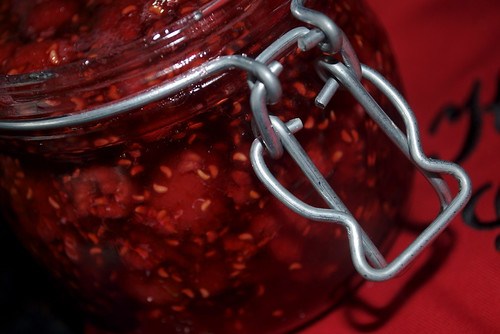