Here we are at the Daring Bakers time again, yippee! 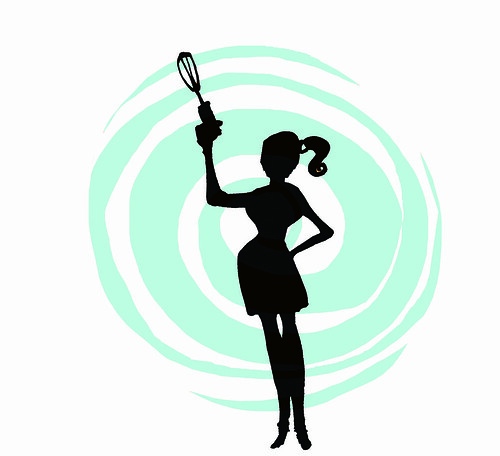 Not only was the challenge based around a cake but I really did think it would be a piece of cake to complete too – I love ice cream and have made several lots before with relative ease and the chocolate cake looked as though it couldn’t be simpler to make; my challenge I thought was to come in one part and one part only, choosing the flavour combinations.

Up until a certain point I was correct in my assumptions; the cake was a doddle to make and the flavour combination plan came together relatively quickly after a brainstorming session but when it came to the ice cream I hit a standstill. I knew what I wanted to make and I knew how to make it, had everything in the pantry to go ahead but didn’t have the space in either of my freezers to accommodate my Kitchen Aid ice cream attachment.

So I had to have a major rethink, how on earth could I make ice cream without using my ice cream machine? Much to my annoyance I couldn’t justify buying a much coveted work top Gaggia, oh how I dream, but I haven’t the space or the ability to justify spending that kind of money on something that wouldn’t get used all that often. After much deliberating I had a ‘light-bulb’ moment, you know the kind where in cartoons light bulbs begin flashing over characters heads, suddenly I remember watching a chef make ice cream in a food processor that didn’t require any freezing on Saturday Kitchen, so I headed straight over the their website and searched for the recipe, success was to be had at last. I needed to play around with the recipe a little to achieve my planned flavour combination but it worked out really well. Do give it a go, I was so sceptical but the result was utterly delicious, so rich and creamy. My version of the recipe can be found at the end of the blog post. Another thing I need to point out here is that although we were given two ice cream recipes by the challenge hosts we didn’t have to stick to them and were allowed to go with whatever recipe we wished.

So I can hear you muttering, get on with it, what flavours did you use? I flavoured the chocolate cake with green cardamom and teamed that with a bitter Seville orange ice cream; that bitter, sweet balance really worked out well and brought the dish together brilliantly.

The cake was so simple to make and utterly gorgeous to eat, but only in small pieces as it was so rich. I confess here that I ate some of the mix before it reached the oven and it was even more delicious then; almost like a hot chocolate mousse which would be just perfect to dip crisp amaretti biscuits in for a simple but elegant dinner party dessert. 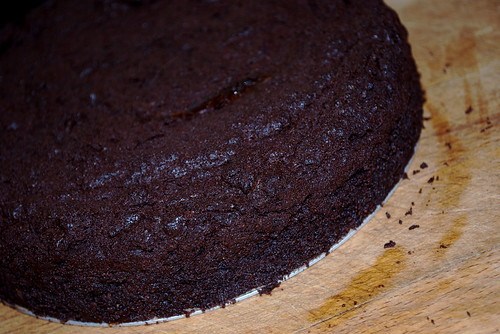 I used Valhrona  70% chocolate and French unsalted butter which made the (delectable) cake rather expensive but as the flavours are so pure it really is worth making the extra effort to obtain top notch ingredients. The addition of the cardamom really brought out the Valrhona Guanaja Dark Grand Cru Chocolates flavour – it is made with a blend cocoa beans from South America and has an exceptionally bitter flavour which is offset by floral tones which marry perfectly with the heady sweet scent of the ground cardamom. Although buying pre-ground cardamom would save time I’d always go for freshly ground for a cake like this, you want to keep as much of the aromatic flavour as possible. 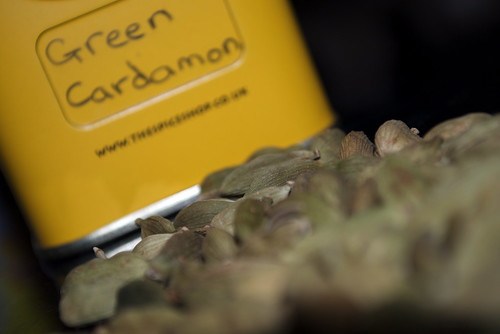 The Seville orange ice cream was really simple and effective too, who would have thought ice cream could be made in less than five minutes (plus of course the freezing time) and be completely smooth and creamy too? I wouldn’t have believed it if I hadn’t made it myself but please do trust me and give it a go.

The ice cream was served in espresso cups from the Nigella Lawson Living Kitchen Collection (a lovely present from the lovely Brenda) with a small cylinder of cake on the side, a bigger portion really wasn’t required as it was so rich. I scattered the ice cream with crystallised strands of Seville orange peel which gave the dish a little more texture and boosted the presentation too. As with almost all sweet dishes a scattering of icing sugar just set the finishing effect. 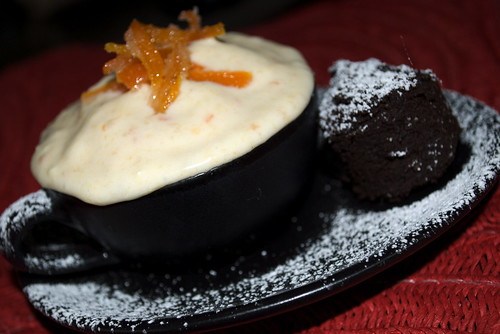