A couple of weeks back I really wanted some fish stew and it had to have a Middle Eastern influence so I set too looking through my Claudia Roden books, she is (it really must be admitted) at the forefront of Middle Eastern cookery having written many books on the subject which are so inspired, in depth and knowledgeable that you can’t fail to be amazed. The resulting meal was an amalgamation various recipes - I give you Tunisian Fish Stew with Potatoes.

Claudia has often stated that in The Middle East you can tell your location by the smell of  the cooking and the taste of the food, now I’m not 100% how true that is but doesn’t it sound great? She goes on to say that  if you have ever walked through a Middle Eastern or North African spice street, you will never forget the intoxicating effect of the mingled scents and the extraordinary displays of red, brown and golden powders, knotted roots, bits of bark, shrivelled pods, seeds, berries, bulbs, and buds. Again the very thought makes me shudder with excitement and the desire to travel, I’ve never visited the Middle East despite the food being one of my favourites; I have however visited Gibraltar, it wasn’t a place that overly inspired me really – too many tourists visiting en masse to shop for cut price drinks, tobacco and whatever else they could find – one thing that did inspire though once I’d got off the beaten track was the Moroccan influence on the food, I had one of the best tagines I’ve ever eaten there and came away with a lovely wee dish as a freebie souvenir too.

So back to the point of the post and the delightful stew, as per my usual habit, I added a selection of seafood (not just the specified white fish) to the pot, including lobster, prawns and mussels. I also added a dried lime to the stew as it cooked, I appreciate that this is generally an Iranian thing to do but I love the astringent flavour it gives, a real mouth cleanser, allowing all the other flavours to be fully appreciated with each bite. 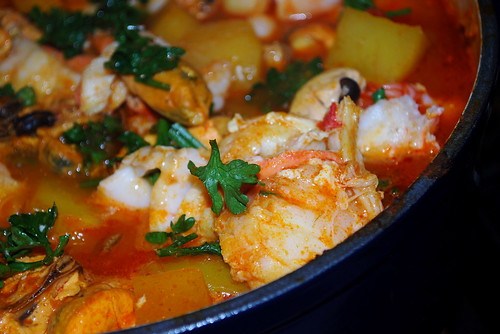 The stew had a most delightful piquant flavour without being too spicy for the fish to cope well, I wouldn’t change the recipe at all – something I don’t say all that often, so it must be good. If I’m going to have one negative it would be that the stew is incredibly thin, so much so that I’d be tempted to call the stew a soup instead but that’s only a minor quibble and anyhow there’s nothing wrong with a good dish of soup.

I served the stew with some hot crusty onion bread, the idea came from Middle Eastern Cookery

(Arto Der Haroutunian), but I made mine using basic soda bread recipe that incorporated caramelised onions into the dough and was scattered with nigella seeds before baking. The bread was just the ticket for mopping up all the lightly spiced, fragrant juices of the stew. 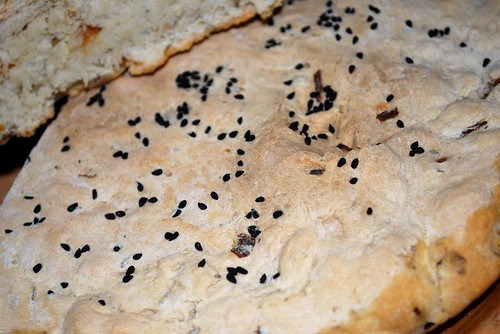 What could be better on a cold wintery evening than a great big bowl of stew? 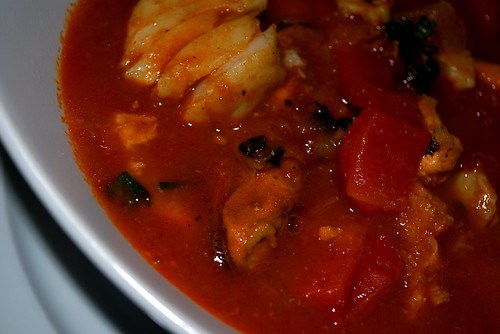