When I got a big bag of the above strange looking tubers in my weekly vegetable box from Riverford Stockly  the immediate response from my mum was “What on Earth are they?” Luckily I recognised them but I guess lots of people wouldn’t, they’re not an overly common sight here. They are Jerusalem artichokes, a vegetable I’d never eaten until today.

The Jerusalem artichoke has no real link with Jerusalem, and isn’t related to other artichokes. It looks a bit like a knobbly pink-skinned ginger root and has a sweet, nutty flavour, reminiscent of water chestnuts. Jerusalem artichokes are native to North America. The French explorer Samuel de Champlain brought them to Europe after coming across them at Cape Cod in 1605. He described them as tasting like artichokes, and is likely to be responsible for this part of their name. The Jerusalem part is thought to be derived from girasole, the Italian for sunflower to which they are related. Another theory suggests the name is a corruption of Terneuzen, the Dutch city from where the root was introduced to England in 1616.

Jerusalem artichokes are very good for you, highly nutritious containing vitamin C, phosphorus, potassium and are a very good source of iron; they’re also good for the digestive system being very rich in inulin, a carbohydrate linked with good intestinal health due to its prebiotic (bacteria promoting) properties.

After gaining some thoughts and insight on what is best to do with the strange looking vegetable from my friends on a food forum I frequent I decided to go with a soup, after all the weather here is bitterly cold and frosty, just the kind of day you need a lovely warming cup of soup for lunch. The recipe came from Fresh Flavours from Israel by Jana Gur, a lovely book sent to me by the ever thoughtful Francesca. 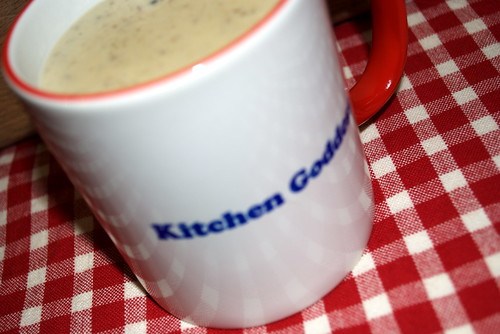 The soup certainly lived up to its name (Creamy Jerusalem Artichoke Soup) being thick, creamy (without being too rich) and silky smooth. It certainly has a distinct flavour, one I really don’t know how to explain, it’s strong and earthy, yet slightly sweet too. Other than being nutritious and highly delicious this soup is also blissfully simple to prepare.

Although not stated in the recipe I swirled in some finely chopped parsley before serving and used black pepper not white as I rather like the speckled appearance it gives the soup.

I hope more Jerusalem Artichokes are to be found in future vegetable boxes as the really are too good to miss out on.