When the delightful syrupy, nutty, filo pastry sweet treat that is baklava is mentioned many of us immediately think of Greece (or at least many of my friends did when asked about them), but the origins of the dish are rather unclear. The general consensus now is that they are to be classed as Turkish; in fact in 2008 the Turkish patent office registered a geographical indication certificate for Antep Baklava but some food historians still dispute this.

I’d half a pack of filo dough leftover from making some party nibbles over Christmas and after a quick scan of Rachel’s Baking Secrets: From Cookies to Casseroles, Fresh from the Oven

(Rachel Allen), I decided to go with a sweet treat – Baklava! I’ve eaten baklava several times while on holiday both in Turkey and Greece, it is a love or hate food I think and I happen to love it. I’ve only once made it before at home and it was rather a disaster but this time it worked out perfectly — crisp pastry encasing melt in the mouth, sweet, flavoursome nuts. I did make one change to the recipe, to use up a jar of chestnuts I added them to the nut mix, pistachio and chestnut is a fabulous combination, one I had to make a note of repeating again; the sweetness of the chestnuts against the slightly salty edge of the pistachios worked a treat.

As I was working with only a small amount of filo I cut the recipe into thirds and used a loaf tin to layer up the mix too, it only gave me seven slices of baklava but oh what lovely slices they were. 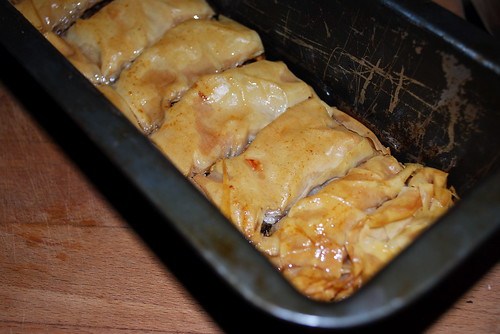 I will most certainly remake the dish using the full amounts, but, note to self here only do so when expecting guests or the temptation to dig into another piece and then another may just be too much. 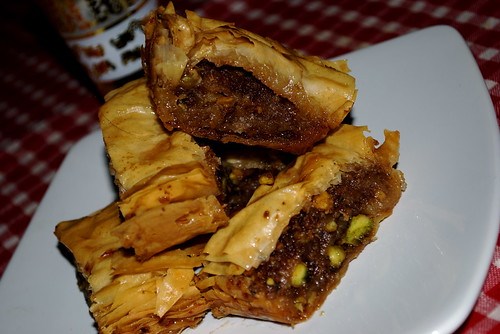 I served them with some mint tea, it seemed so apt as everywhere we went on our trip to Turkey we were handed either small glasses of apple or mint tea and I really do mean everywhere — even the local grocery store. A lovely gesture, a rather delicious one too! One of my lovely friends (Francesca) sent me some gorgeous Moroccan tea glasses for Christmas and had previously sent me a finjan, so I used that rather unauthentically to brew the mint tea. A finjan is the name given (in Israel) to the pot used to make Turkish coffee, in Turkey it would be known as a cevze, still though it worked perfectly for the mint tea too. 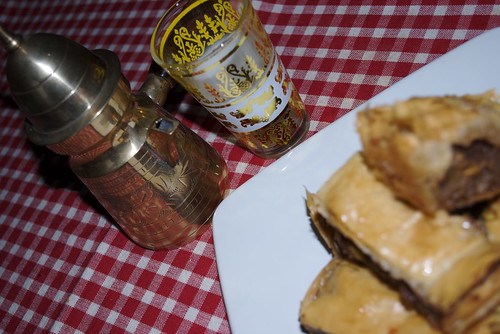 If you’ve never eaten baklava you really must, it really is an eat it and weep dessert.