Another “New Years” inspired dish, this time from Italy where it is traditional to have sausages (typically Cotechino) and lentils on New Year’s Eve to symbolise wealth and abundance for the following year – Cotechino sausage is a symbol of abundance because they are rich in fat; while lentils symbolise money (being both green and coin shaped).

Cotechino Modena or Cotechino di Modena, also sometimes spelled cotecchino or coteghino, is a fresh sausage made from pork, fatback, and pork rind, and comes from Modena, Italy, where it has PGI status. Zampone Modena is closely related and also has PGI status. Cotechino dates back to circa 1511 to Mirandola, where, whilst besieged, the people had to find a way to preserve meat and use the less tender cuts hence they made the Cotechino. By the 1700s it had become rather popular and in the 19th century was in mass production in and around the area.

Despite having a Cotechino sausage in the fridge I decided to go with using some fresh Norcia sausages instead. The Cotechino was just far too large for feeding only three people, it will have to wait until I have friends round for supper. Norcia (a region within Umbria) is reportedly the pork capitol of Italy and my lentils of choice (Castelluccio) are also from the same area i.e. Norcia.

According to The Food of Italy (Claudia Roden), Umbria is known as the Green Heart of Italy, beautiful, spiritual and artistic — so much so she wonders if the people are so interested in matters of the body such as food here as they are in other Italian regions! My first thought was how can Claudia ask this? However Claudia does go on to explain that food plays a truly vital role in the Umbrian society as it does throughout the rest of this beautiful country; despite the food here being simple, seasonal and homely it is filled with elegance, truffles, excellent meats and cheeses, top notch olive oils to name but a few. 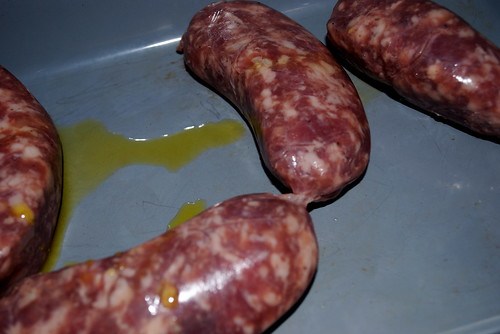 The sausages were thick, meaty and delicately spiced, I’m not sure exactly what spices were included as the packaging didn’t say but I definitely got the hint of chilli, fennel and black pepper. 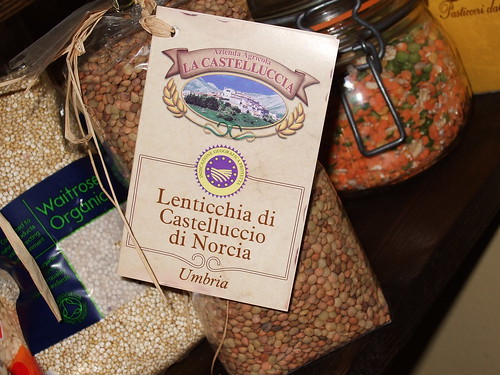 Castelluccio lentils are brownish and very small, doesn’t look much. It doesn’t have the mottled teal beauty of puy lentils, or the cheering, orange glow of the red lentil; for me at least they are the finest lentil going. They come from Umbria, where they grow on the Castelluccio plain below the Sibillini mountains. Like all lentils, they’re really healthy — a great source of protein and fibre. They retain their shape when cooked, and have a wonderful, nutty, earthy flavour. They also soak up the flavour of other ingredients really well, especially good here with the meaty, spiced juices of the sausages to absorb. 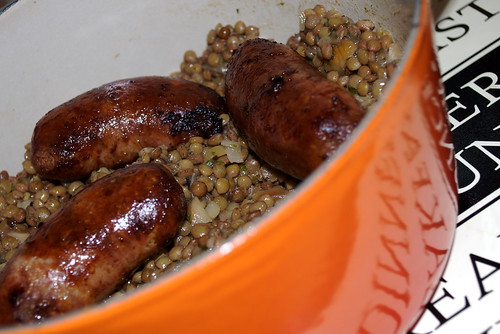 Serving on a bed of simply cooked Castelluccio lentils really brought the flavour of the sausages out, it made the best of them. The only accompaniment needed was a good glug of extra virgin olive oil (Umbrian by preference) and possibly a dribble of good balsamic vinegar, I used one aged for 25 years so it was ultra sweet, sticky and matched the saltiness of the meat perfectly. 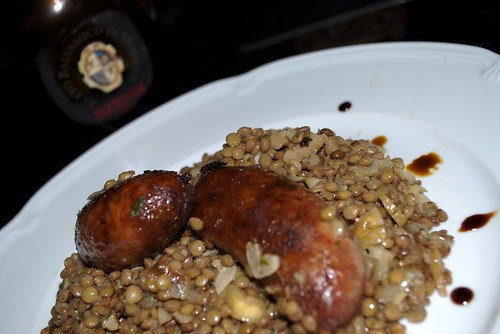