I bought myself a copy of Kylie Kwong’s latest book My China: Stories and Recipes from My Homeland

the other week in the January sales, it’s a lovely book full of photography that makes you want to pack your suitcase and head for the nearest airport, China being your destination of choice. I’ve read several poor reviews of the book though since buying it and to be honest they’re mainly because either people wanted a ‘recipe only book’ and there is too much commentary here or that the recipes do not conform to the ‘ultra healthy’ idea of Chinese food they had. Well, I love a good read and sitting down with a food book to read from cover to cover suits me well, as does a little unhealthy indulgence from time to time. Most of the recipes could be adapted pretty easily too to make them a wee bit healthier with no great impact on the flavour of the dish either.

After reading the book and checking out the pantry for the necessary ingredients I decided to make Kung Po prawns (Kylie uses chicken pieces in the book) to be served along side her caramelised potatoes. 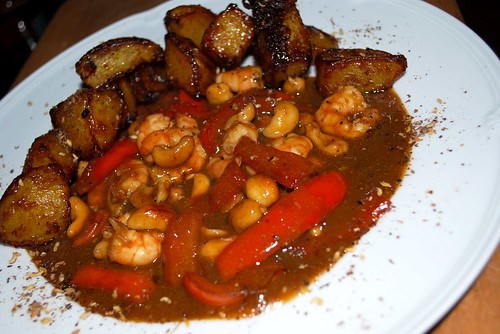 Kung Po is a classic dish in Szechwan cuisine, originating in the Sichuan Province of central-western China. The dish is named after Ding Baozhen (1820-1886), a late Qing Dynasty official. Born in Guizhou, Ding served as head of Shandong province and later as governor of Sichuan province. His title was G?ng B?o  or palatial guardian. The name “Kung Po” is derived from this title.

Sichuan food has a reputation for being very hot and spicy, which to a certain extent is true, Kung Po for example is a truly fire-eating experience but at the same time it’s flavoursome and delicate too.

In keeping with Sichuan cooking habits I didn’t use the pre-roasted nuts Kylie recommends but went for the ‘plain’ version and fried them in the chilli oil before adding the other ingredients, at this stage I added a sliced red pepper too for colour and a little more texture to the dish.

On serving I scattered the dish with ground Sichuan peppercorns, Sichuan cuisine is famed for bold flavours, particularly the spiciness resulting from liberal use of chillies and “numb” or “tingling” flavour of this type of pepper.

It is unclear precisely how chilli peppers were introduced to Szechwan, a landlocked, mountain-ringed region in western China. The most accepted view is that Indian missionaries brought chillies with them during their travels along China’s famous Silk Route – a series of pathways originally constructed during the Han dynasty for military and strategic purposes, that subsequently gained more importance as a major trade route. Another theory is that they were brought in by Chinese merchants trading with Portuguese and Spanish sailors at various seaports. In any event, today chilli peppers are an indispensable feature of Chinese regional cuisine. Dried peppers are frequently used in Szechwan dishes, while cooks favour fresh peppers in the neighbouring province of Hunan.

The potato dish didn’t seem very typical of China to me, somehow roasties by another form just didn’t seem quite right but the idea still seemed gorgeous, so gorgeous they had to be my first (or at least joint first) recipe to try. They were absolutely amazing, the perfect sticky mouthful. These will be eaten here time and time again. A word of warning though, do not do as I did and try cook them in the actifry (cutting out the par boiling stage), unless you want to spend hours cleaning the caramel out of the rotating paddle.