I’m so late posting about this Violets Pantry ‘Nigella Express Challenge’ that I feel I must begin by apologising to the lovely Teresa who set the challenge, other meals and life generally just got in the way of posting about the great choice she made but here is the write up at long last.

(Nigella Lawson), which turned out to be anything but rapid. How can a meal from an ‘express’ style cookery book take nearly a whole day to prepare and cook? Simple, it sits in the slow oven all day simmering gently, allowing the flavours to develop, leading to an unctuous, tender and wholesome dinner later in the day. Another bonus of doing this is that the aromas to fill the kitchen are divine, so homely and welcoming.

I really don’t think the ragu would have been half as good or as full of character should I have only cooked it for the specified 20 minutes, personally I don’t believe minced meat can be cooked so quickly unless it is a ‘high quality’ cut such as sirloin which you have minced yourself for some such delight as home made burgers.

I had to make a couple of changes though, frying off some thinly sliced onions until golden and sticky rather than using a jar of ready prepared ones as they’re not the kind of thing I keep in my fridge and I added a diced yellow pepper, used a couple of grated garlic cloves instead of garlic oil  and swapped the cheddar cheese for parmesan too as it seemed more appropriate.

The addition of lentils was a lovely idea, bulking the meal up a little and giving chance for the amount of meat used to be reduced, something I’m generally pleased to do in recipes such as these.

Instead of going down the serving with pasta route I decided to use polenta, I love polenta especially when it’s highly seasoned, cheesy and served in the ‘wet style’.  I cooked the polenta as directed by Giorgio Locatelli in his book Made in Italy: Food & Stories

, that is I used milk with a little vegetable stock as my cooking liquor and added plenty of parmesan and a diced up ball of mozzarella too once the polenta was ready for serving.  A word of warning though buy proper slow cook polenta, the instant stuff is utterly disgusting. 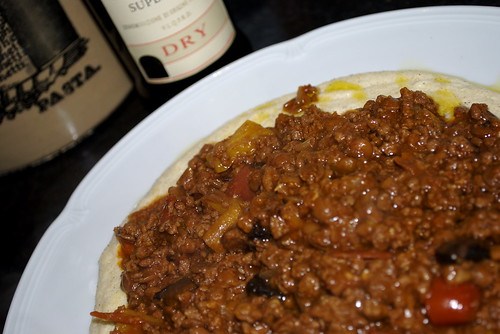