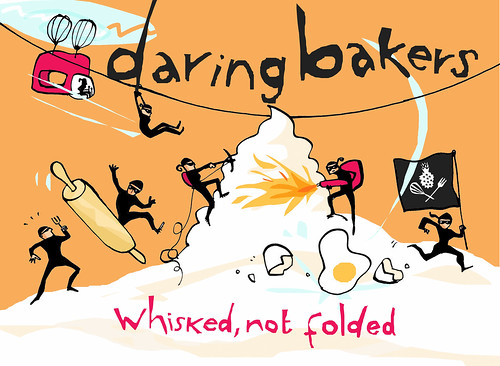 It’s Daring Bakers time again and this month we’ve gone back to sweet treats, and oh my was this treat sweet!

This month the challenge was set by Delores of Chronicles in Culinary Curiosity, an absolutely lovely blog, which should I not have been a Daring Baker I doubt I would have come across, or at least not anytime soon. That’s one of the great things about this group of blogging cooks – we get to read so many fascinating blogs that otherwise may have gone undiscovered. Delores was assisted by Alex and Jenny.

So for the challenge Delores picked a recipe created by Shuna Fish Lydon of Eggbeater, her signature Caramel Cake with Caramelised Butter Frosting. In a supporting role we had an optional challenge: Alice Medrich’s Golden Vanilla Bean Caramels from her book Pure Dessert.

On my first reading of the challenge I have to admit I hated the idea of it; sweet, sweet and more sweet, wouldn’t that lead to sickly? In the spirit of friendly competition, not letting the side down and the excuse that I had to bake I decided to give the cake a whirl with the caramels too (might as well go the whole hog if you’re going to make the effort). 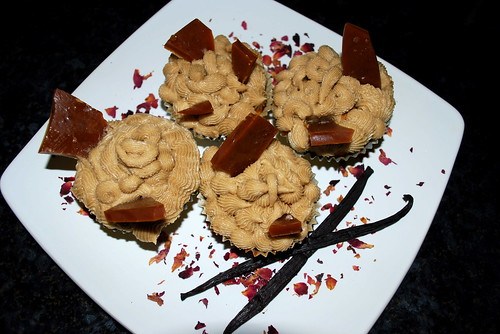 As you can see I went down the route of making cupcakes instead of a typical round cake, not only did I think they’d be easier to ice and look prettier but it gave me the option of being able to only serve/eat small portions if the end result was overpoweringly sweet and sickly as I anticipated. I know you can serve slivers of cake but firstly I’m not that dextrous and secondly if I see a big home-made cake I want to eat a big slice of it, greedy little piggy that I am.

I made another change to the recipe too, although I have to say in my defence it wasn’t planned, I promise! When making the frosting, I’d got the butter ready cooling and everything laid out ready on the counter, all set, or so you might think; on a last check over the goods I realised I’d not got the sugar out; so off I trotted to the baking cupboard only to find I’d no icing sugar; should I go out in the wet, windy winter weather or substitute for something I had in the cupboard? I went for the easy option, staying warm and substituting; I used soft light brown sugar instead of icing sugar which I blitzed in the food processor to break it down a little and it worked out just fine. No it didn’t work out just fine, it worked out superbly, I loved the deep toffee hint it gave, which the almost nutty browned butter flavour was intense, deep, fragrant but not at all sickly (hurrah!). Combine that with the slightly grainy texture the sugar gave and we were in frosting heaven. 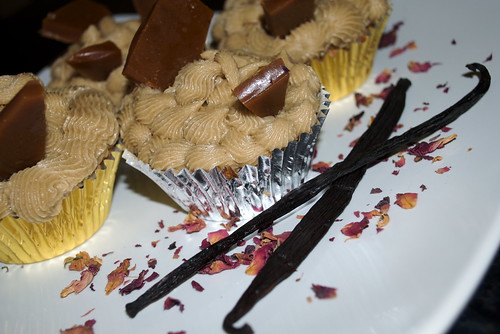 It is often said that cupcakes are simply a vehicle for the frosting, and in some cases I do agree, but not here. The sponge cake was so  light and fluffy, almost too light; not in a bad way culinary speaking but because you could go back and back to eat some more and more. Oh dear I’m not painting a very good picture of me am I, honestly I’m not a glutton who eats and eats and eats, and no I’m not the size of a house either but I do love cake, especially a good sponge.

Now for the caramels. From reading other Daring Bakers experiences over on ‘our’ forum I gather quite a few had problems but all went smoothly here, I have no idea if it was experience, equipment, ingredients, a combination of those or simply lady luck that made all go well, but well it went. I flavoured the divine sweeties with vanilla and rose, simply splitting a vanilla bean in half, scraping the seeds out and letting them infuse in the cream along with two tablespoons of dried rose petals, the vanilla bean pod I removed prior to pouring the cream into the molten sugar but I left the softened rose petals and vanilla seeds in for flavour and texture.  Once the caramel had cooled enough that it was firm but still a little tacky I pressed some pick Himalayan salt crystals into the surface giving a lovely edge to the sweet, chewy toffees.

The salt crystals are so beautiful aren’t they? It’s just a shame they didn’t show up on my photographs. Himalayan pink salt is a pure, hand-mined salt that is derived from the foothills of the pristine Himalayan Mountains. Harvested from ancient sea salt deposits, it is believed to be the purest form of salt available. The high mineral crystals range in color from sheer white, varying shades of pink, to deep reds, the result of its high mineral and iron content. So not only is it beautiful, gorgeous tasting, but good for you too! 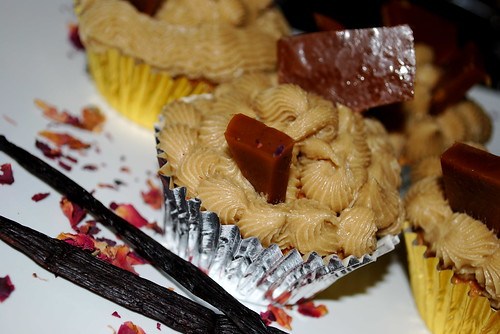 I didn’t cut the caramels up neatly as directed but using a toffee hammer broke the large slab into splinters which I then studded the rather rustically iced cupcakes with, abstract is the only word I can think of to describe them, but abstract is good isn’t it? I’m really pleased with how they turned out, dare I say it, I think they look cool.

In the end I have to say I’m overwhelmed by how good these cakes were, not too sweet, not at all sickly but just perfect, in fact I’ve been asked to make them again and soon. Thanks Shuna for sharing the recipe and Delores for picking out a recipe that I’d never have picked myself in a million years.

Roll on next months challenge, but if you’d like to see more Daring Bakers efforts for this month, please check out the blogroll.