I realise I’m very late posting this but last Friday was Children in Need day, but it’s not too late for donations at all, so I don’t feel so bad in being so late. Children in Need is an event run by the BBC – each year since 1980, the BBC has set aside one evening of programming on its flagship television channel, BBC One, to show events aimed at raising money for charities working with children in the UK. In 2007, the last event, the charity raised over £37 million, of which £13 million was raised on the broadcasted evening. BBC coverage also extends across the BBC’s other television channels and national and local radio channels. A mascot called ‘Pudsey’, a teddy bear with a bandage over one eye, was introduced in 1985 and has become a regular feature. In 2007 Pudsey and the Children in Need logo were redesigned. Children in Need was registered as a charity in 1989. The appeal gains the majority of its money from donations of private individuals who may themselves have raised the funds by taking part in sponsored events, or large companies may donate directly or by offering services in kind.

Although I donated I didn’t actually take part in any events of any kind, usually something is done at work such as wearing our own clothes for the day (for the cost of say £1) but this wasn’t done this year.

This idea of doing something for Children in Need inspired our dinner that evening; I bet you’re wondering how, especially I already said that I didn’t do anything special. Well Suki, a lady who works with my Dad, bought lots of samosa’s into work that she’d bought from a local store, sold in aid of Children In Need (the samosas are made by the store owners, I think; anyway they’re not the mass produced ??? what they contain standard shop bought ones) and she then sold them onto her colleagues. My Dad bought lots of them, some I reheated to go with a curry that night, the others are sitting in the freezer waiting for the opportunity of another Indian meal. 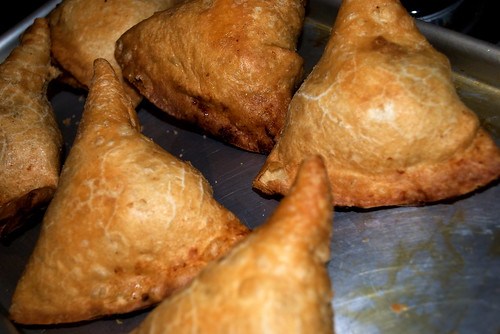 Delightfully light, crisp pastry encased the surprisingly spicy filling, beware the whole green chillies, whoa they’re certainly tongue tingling. I love samosa, especially traditional vegetarian ones (like these), and even though these were a little on the hot side they were still delicious – containing a mashed potato base, dotted with peas, and I think a little onion too, alongside plenty of fresh chilli and what tasted to me like a garam masala blend. Thank you Suki, I can’t wait to eat the next batch, yum

So onto the curry, I used (shock horror) an organic curry sauce (Balti style) which in a moment of madness I bought at the local butchers, in the hope that it would create a quick, easy meal; how wrong could I be? Very wrong is the answer! Despite my adding of lots of additional spices (including Kashmiri chilli powder, cumin, coriander, black pepper, to name but a few) and the amount of vegetables (broccoli, peppers, carrots, onion and leeks) added too, along with the chicken (boned out thigh meat), and giving it long slow cooking instead of the twenty minutes the sauce advised it was still rather bland, lacking in base note flavours and just giving a tomato pasty, almost oily aftertaste (even looks a wee bit artificial in the pic doesn’t it).  I will not be buying anymore of those sauces, home-made it’ll have to be from now on. 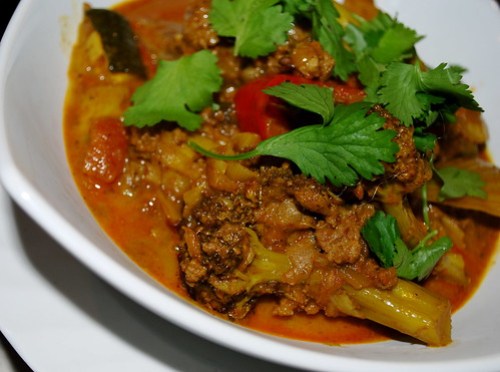