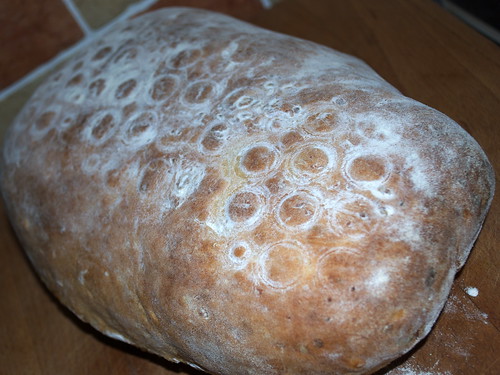 Potato bread comes in lots of different guises, this one incorporates mashed potatoes into a yeasted dough which is then baked in the typical manner, others include griddle breads such as this one.

The absolute delight of a recipe is from Nigella Lawson’s How to Be a Domestic Goddess: Baking and the Art of Comfort Cooking

which is one of my all time favourite cookery books, one of the first I was ever given as a gift and one that I return to time and time again, never to be disappointed.

The dough is a heavy and tight one, needing to be kneaded for a long while more than you would expect for what on the surface looks to be a pretty much standard white bread dough, but persevere and you will be rewarded. The bread is fabulous, springy, soft, light but with a certain chewiness to it too, perfect for eating with a good hearty stew or soup and mopping up all the delightful juices, yum.

Be aware though that adding more potato than the equivalent of 30% of the flour weight can (and most often will) lead to an unforgivably dense, moist loaf that no amount of baking will rescue, trust me I’ve been there, all you’ll end up with a lump of stodgy dough surrounded by a dreadfully hard shell of a crust. Another point to bear in mind is that the dough is quite a damp dough after kneading, but it takes a while to come together, please for the reasons above, don’t be tempted to add extra liquid unless absolutely necessary, and then only drop by drop.

In case you’re wondering about the circular pattern, I used a potato masher to very gently stamp the pattern on top of the dough just before baking, then dusted with a thin layer of flour to keep the round shapes. I gently dusted the excess flour off once the bread came out of the oven.

Here’s hoping I included on this coming weeks YeastSpotting too, such a fabulous event that it is.