There is something so mystifying about Moroccan food which I love, especially at this time of year when the days are getting shorter and the nights colder, ‘exotic’ food can bring the idea of warmth and comfort so easily and Moroccan food is right there at the centre of it for me.

Contrary to popular belief a tagine is not a meal but the pot in which the food is cooked (see above image). I love tagine cooked meals, they’re so easy to do and generally have such a fantastic flavour. Tagines originated with the Berbers, the nomadic indigenous people of North Africa. The pots were made of clay because the only material available was sand. After a long day of camel travel, these wanderers would make a campfire; when the fire burned down, tagines were cooked on the embers. The conical shape of the lid was designed to retain the one commodity in short supply in the desert: moisture – i.e. the food almost steams within them. For cooks today, tagine cooking means long, slow cooking, with very little fat or liquid in comparison with other cooking methods.

(Claudia Roden) was no exception. Please note the recipe written at the base of this post bears little resemblance to the original Claudia Roden recipe.

The number seven is considered auspicious in Moroccan culture, so hence the inclusion of the seven vegetables in this popular celebratory dish. As Claudia points out the spicy sauce in this dish is more Algerian or even Middle Eastern in its properties, being hotter and less fruity than those commonly associated with Morocco, whatever the culinary origins it is delightfully delicious, a taste-bud tantaliser. Although not mentioned in Claudia’s recipe I couldn’t resist adding a couple of spoons of Ras el Hanout to the sauce too, Ras el Hanout literally translates as ‘head’ or ‘top’ of the shop and contains anywhere from 10 to over 40 spices, the intoxicating aroma is said to have been originally assembled by a nomadic warrior combining all the scents of the countries he had passed through.

Most frequently Kseksou Bidawi is served on a bed of couscous, which is unusual because most tagines are served with either flat bread or rice.

Saffron plays a huge part in Moroccan (and Middle Eastern food for that matter) croping up in half the recipes you look at. It imparts such a unique quality to any dish, and it also happens to be one of my favourite spices. It is described as the most precious and expensive spice in the world. Saffron threads are the dried stigmas of the saffron flower, crocus sativus linneaus. Each flower contains only 3 stigmas and these threads must be picked from each flower by hand it takes approximately 170,000 of these flowers to produce 1kg of saffron filaments each taking around 370 to 470 hours (60-odd days) to produce. The majority of saffron comes from Iran (80% approx) with the rest coming mainly from Spain. The highest grade saffron contains only the pure red stigmas, these are cut and separated from the style prior to the drying process, and this enables it to retain its pure red colour and highest flavour. This type of saffron is called sargol in Iran, the equivalent Spanish name is coupe (meaning cut). Pushal (or La Mancha) saffron is not cut like sargol and therefore contains more yellow parts from the style.

I decided to serve my tagine with saffron rice yesterday, the recipe for which came from Aromas of Aleppo: The Legendary Cuisine of Syrian Jews

(Poopa Dweck), an absolutely stunning book. Normally I would have gone straight to the couscous jar, any excuse to use my Nigella Lawson All Purpose Pot, but as this meal was cooked in memory of dearest Pistachio, whose favourite food was Moroccan, I decided to go for a saffron infused rice dish from Aromas of Aleppo: The Legendary Cuisine of Syrian Jews

, as it was a book I had bought for her and I know she thoroughly enjoyed it.

So here’s to you Lorraine, I hope you would be pleased. 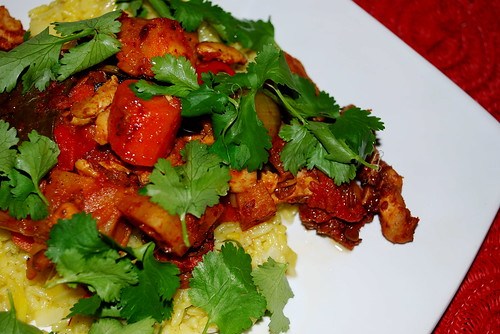