It wasn’t until very recently that I became a fan of Rick Stein’s cookery books, sure I’ve always enjoyed his rather entertaining style of TV cookery; some hilarity always ensues and the food always looks so tempting but alas I didn’t buy one of his books until just a few months ago, now I own three of them! The most recent one being Rick Stein’s Far Eastern Odyssey.

It truely is a marvel of a cookery book; Food Hero Rick aims his sail towards the Far East in order to sample every possible flavour combination in a book which celebrates the culture and cuisine of Asia. Full to the brim with delicious recipes and stunningly inspirational food photography. Rick writes so passionately about the food and the culture behind it, something all too rare among other chefs; he has the ability to bring to life the stories which surround each dish and explains the cultural significance and tastes in such an evocative way making me feel I ams somehow joining him on his culinary journey. All this makes for an almighty hunger and the prompt to get cooking.

First up was the spicy fried potato curry with paneer, but I made several alterations and as such didn’t feel happy to keep the original and traditional name for the dish; hence the new naming of Bangladeshi Style Paneer Curry. 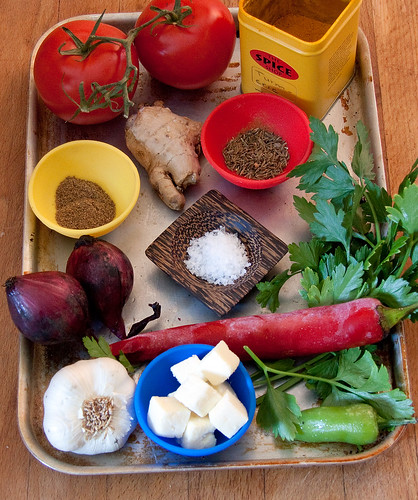 Although quite an array of ingredients are required the dish itself is not complicated or hard to cook; or come to that the least bit time consuming. I had everything prepared and cooked in around 40 minutes, which I don’t think is too bad at all. I dare say this would be utterly delicious reheated the following day so you could prepare at the weekend for Monday nights dinner dash after work.

I suppose that is the only issue with the book; if you’re not wanting to cook food from this corner of the Earth on a regular basis the outlay of buying all the goodies may seem a little wasteful; happen though you’ll buy a few bits and then be tempted to keep your pantry well stocked so as you can venture further in your own culinary travels from the relative safety of your own kitchen. I know I’d certainly be lost without the shelf or ‘Oriental’ goods in the pantry, the cupboard stocked to the brim with rice and noodles or all kinds of varieties and the whole drawer (yes you read that right, whole drawer) of frozen items such as ginger, galangal, lime leaves, curry leaves, lemon grass, chillies … you get the picture.

Paneer is a very mild fresh Indian cheese, rather similar in its almost ‘squeaky’ texture to halloumi. It is made by curdling hot milk with lemon juice or vinegar and the whey drain off through a lined sieve. The remaining curds are then pressed until they retain their shape before being cut into cubes. It is a very easy cheese to make in a home kitchen, but I was lazy and bought mine from a local Kashmiri store.

Bangladeshi cuisine has considerable regional variations. A staple across the country however is rice and various kinds of lentil, which is locally known as dal (sometimes written as daal) & fish. As a large percentage of the land (over 80% on some occasions) can be under water, either intentionally because of farming practices or due to severe climatological, topographical or geographical conditions, not surprisingly fish features as the major source of protein in the Bangladeshi diet. There is also a saying which goes, “Mach-e-Bhat-e-Bangali” (Fish and rice make a Bengali)

The curry had a gently heat, not overpoweringly so as the chillies were left whole; should you want a milder curry just reduce the amount of chillies used. I wanted extra heat so finely shredded one of the cooked chillies and scattered it over my meal. That’s the added bonus here, those who want the heat can eat the chillies, those who don’t can just leave well alone.

I’m positive this curry sauce would work well with prawns or chicken too, happen a combination would be good, but I’m not convinced it could stand up to the meaty flavours of lamb or beef; duck however may just work rather well.

I served this Indian delight on a banana leaf, freshly cut from our garden but that is by no means an essential item, a plate will do just fine. The smell alone of a freshly cut banana leaf is enough to make me dash out to get some though, so sweet and ‘tropical’. Should you want banana leaves and not be lucky enough to have them growing in your back garden according to Rick you can mail order them within the UK, where from I’m not quite sure. 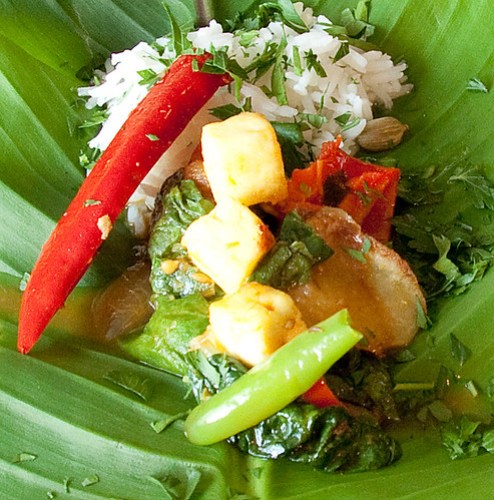 The tendency in Bangladesh is to eat with your fingers, hence you either need a very thick curry or plenty of rice. Rick goes on to say that in general ‘Westeners’ is to add too much curry to their rice and then they are unable to master the art of moulding the food into a neat ball and thus to at with any elegance at all. The rice is more than a filling component, it makes the dish. It is the same principle, say, as pasta in Italy – the sauce complements the pasta not the other way around; another idea we seems to have ‘issues’ with in the UK, still restaurants insist on slathering ladles and ladles of sauce over a sorry looking plate of pasta; ahh I digress.  Put in its most basic terms, without rice a meal is not a meal.

I obviously wanted basmati rice with a curry like this but to perk it up a little – the brand I had wasn’t exactly the most flavoursome – I added some bruised cardamom pods; you know how much I love cardamom! Little green nuggets of freshness, perfect for giving both sweet and savoury dishes a little lift.