Blondies are a non-chocolate variation of the traditional chocolate brownie. They are baked in a baking tray in the oven in a similar manner to how traditional brownies are baked. The name ‘Blondie’ comes from them having a ‘butterscotch’ yellow colour, a reference to the hair color, blonde.

Despite the popular misconception that brownies are far superior, blondies are not the poor relation to the chocolate brownie, they are a delicious bake in their own right.

According to old cookbooks, blonde brownies (also known as “Blondies”) predated chocolate brownies, though under different names. The primary ingredients of blondies (brown sugar/molasses and butter) compose butterscotch, a candy that was popular in America in the mid-19th century. Some 19th century American cookbooks contain recipes that combined traditional butterscotch ingredients with flour and a leavening agent, thus creating a blondie.

These American 19th century recipes are thought to be descendants of gingerbread cakes which dated back to Renaissance times, these cakes were commonly baked in shallow pans and included nuts and brown sugar.

For me a great blondie will have a texture (though not taste) someway between a tray bake cake and a fudgy brownie: that is to say, delightfully chewy, moist and slightly sticky. 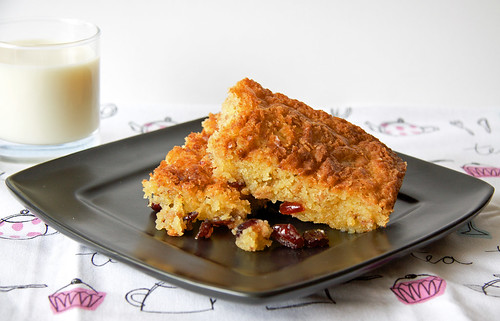 The cranberry & white chocolate oatie blondies I made the other day (pictured above) fitted the bill perfectly. They were squidgy yet cakey with a gorgeous papery, flakey top.

Blondies are often viewed as being more sickly than their dark cousins the chocolate brownie but despite the addition of white chocolate these weren’t at all daunting, we were all quite happy to go back for second (and third) helpings. Happen the addition of the fruit and oats cut through the sweetness a little too.

The addition of dried cranberries and oatmeal (both medium and course) not only added texture but somehow made them feel healthy too. There is something about oats that makes everything including them feel healthy, even if they are surrounded by buckets of chocolate or other such ‘naughty’ treats. It is no wonder that the oats have a healthy feeling to them as they are incredibly good for us; just take a look here to see how they benefit us; they are a super-food indeed.

Cranberries are also one of natures super-foods. They have long been valued for their ability to help prevent and treat urinary tract infections. Now, recent studies suggest that this native American berry may also promote gastrointestinal and oral health, prevent the formation of kidney stones, lower LDL and raise HDL (good) cholesterol, aid in recovery from stroke, and even help prevent cancer. Fresh cranberries, which contain the highest levels of beneficial nutrients, are at their peak from October through December, but throughout the rest of the year frozen or dried cranberries can be used with success too. Not to mention of course that the ruby jewels also glam up the bake too, making it much more attractive on serving.

Whilst these blondies were great served cold with a hot drink for a mid morning snack, the best way to serve them would have to be with some fabulous home made vanilla ice cream such as this recipe and a drizzle of Pedro Ximenez sherry.  Pedro Ximenez is desert in a glass! Deep dark rich in color with a sweet nose and long lingering sweet finish with the key flavours being an essence of raisins, toffee and chocolate.