Not so long back I joined Twitter, some of you might even have noticed the “follow me” button on here. Twitter is something I’ve put off and put off; do I really need to cram what I’m doing into 140 characters and spout about daily life to the rest of the world? Is what I do that interesting? Oh well I babble on enough here don’t I, why not start tweeting too; so bare with me I’m new to all this, please be gentle with me, oh and do say ‘hi’ on twitter if you’ve got a moment to spare.

One of the first Tweets I read was by A Forkful of Spaghetti, who has a most amazing food blog; sure most of my contacts on Twitter are fellow bloggers. A Forkful (as they are known out in ‘tweet land’) had just finished reviewing The Eagle Cookbook: Recipes from the Original Gastropub

by David Eyre. You can read the review here, such a great write up left me wanting needing the book, in true form I made fast headway to Amazon and bought a copy before I could stop my mouse hovering over the ‘purchase’ icon — whole procedure done and dusted in no more than a couple of minutes. 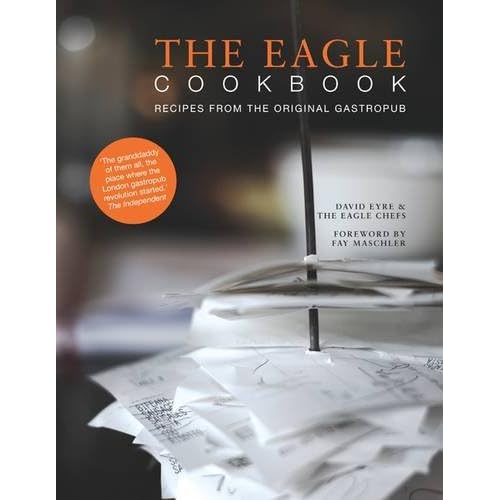 A couple of days later the book arrived and I began the wonderful task of reading the lovely selection of robust recipes of the pubs past and present chefs, and jotting down recipes to try, recipes to adapt and general ideas to be gleaned. All of this came in incredibly handy for yesterdays dinner.

I had guests for dinner and wanted a classy (all right slightly cheffy and show off type) dinner but without too much hassle, I didn’t want to be tied to the kitchen all day or to the stove when my guests arrived. The Eagle had recipe choices aplenty, good home cooking but with a modern and slightly ‘exotic’ twist.

In the end I adapted a beef stew recipe, giving me the basis of a marinade and sauce for roast duck and served it with a Tom Norrington-Davies savoy cabbage and roast potato dish. I know what you’re thinking, how does beef stew become roast duck? Well, keep reading because you’re about to find out.

Originally my plan was to simply roast a duck crown and serve it with a red wine reduction but then I got the notion that it would be a good idea to marinade it in the same manner as say you would marinade the beef for a Bourguignon – but how? Scanning through The Eagle Cookbook: Recipes from the Original Gastropub

I was grasped by some lovely photography on page 157, well opposite that sat a recipe for Casseroled Beef with Cinnamon, Thyme and Shallots. Feeling highly inspired I began to read further through the ingredients list making a mental list of which components would work well with a rich meat like duck; cinnamon yes, red wine yes, thyme yes, garlic yes and so it went until I had a lovely bath of aromatics waiting for the duck to submerge and relax until the big event. 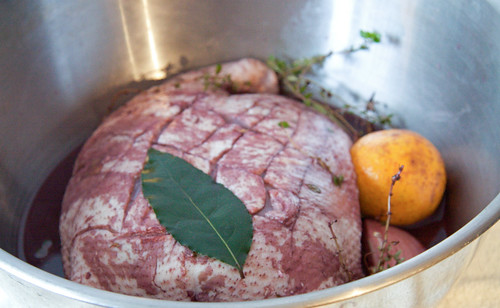 This soaking causes the meat to gain buckets of flavour while plumping it up with water so that after cooking it still contains a lot of juices and remains incredibly moist. It also (shamefully hangs head) allows for the meat to become slightly stained in colour and allows the cook to get away with serving the meat a tiny bit rarer than she otherwise would have; bonus!

There seems to be a bit of a panic about roasting duck, goodness knows why though. The high proportion of fat means a moist bird even if it is slightly overcooked and unlike chicken or turkey it can be served rare, timing is obviously an issue but not a major failing point should you be slightly ahead or behind of your timing schedule.

The wine and aromatics then formed the basis of the sauce, I simply strained it and boiled it to reduce in volume after adding a splash of red wine vinegar and some brown sugar. The vinegar gave a lovely kick which cut through the ‘fatty’ mouth feel of the duck. 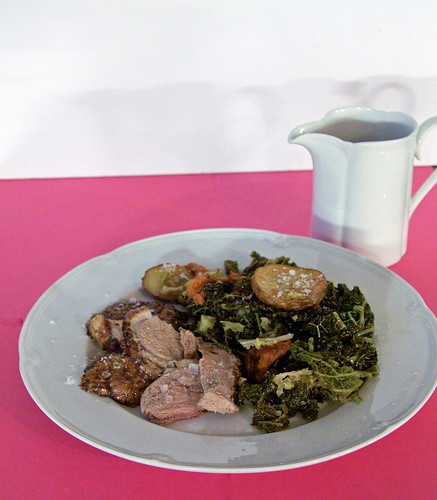 The duck should really have been the star of the show but I have to confess it wasn’t. The real star was Tom’s cabbage and potatoes, that dish is to die for. I concede that the potato dish did rather worry me — duck fat roasted potatoes = perfect, savoy cabbage simmered for 30 minutes = a cause for concern. I needn’t have worried, the cabbage whilst soft maintained its fresh vibrancy both in taste and colour.

Now I know I’m a bit of a spud addict but that aside this is a dish not to be missed, everyone was clamouring for second and third servings. I wish I’d made more of it, but then who could not enjoy duck fat roasted potatoes tossed with juniper scented dark iron rich cabbage? I did adapt the recipe a wee bit to suit the ducks flavours and had to sadly omit the chunks of pancetta as I didn’t have any, although I believe they’d have made a great companion to both the duck and cabbage dishes. I also added a couple of sweet potatoes as I had them lurking in the vegetable box and it seemed a shame not to use them up. I love the sweet, stickiness that you get with sweet potatoes, completely different to the crunch of a basic roasted spud but just as good.

Thank you Tom for a true recipe keeper. 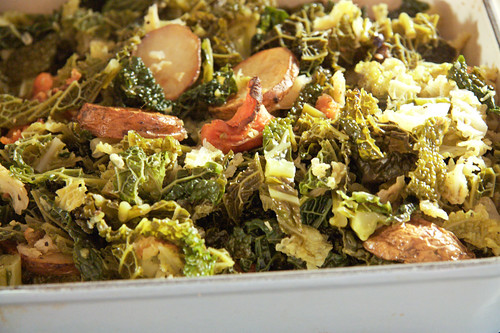 The glistening shades of green dotted with reddish tinged  browns make me think of autumn leaves, I wish you could smell it.