Oh how the seasons are changing, winter is drawing close with its dark nights and cold frosty mornings being more and more frequent and the warmth of summer being but a distant memory, not that I’m complaining as I love wintertime but all the same it spells out a need for comforting food and time to spend in the warmth of the kitchen.

The change in seasons also sees an end to the delicate summer berries and a surpless of apples, so onward to the preserving pot to make the most of the goodies.

I’ve loads of frozen berries in the freezer, kept for sudden emergency requirements of summer freshness but they also make great jam. I’ve not really been one for jam making until very recently, I thought it would be a lot of mess and effort for very little reward, but how wrong was I! I’ve never tasted anything so good as home-made jam from any source be they farm shops or mass produced, so very very good; even to the point that I’d eat a jam sandwich and that is one food I wouldn’t even have considered before. Another reason for me lack of enthusiasm was a lack of space for storing the goods, but now we’ve got the pantry and a garden shed too (which is turning into a second pantry) so I’ve plenty of space to fill up.

I wanted to make the most of the apples and the berries so I went for a berry and apple jam. Tayberries were my berry of choice the other day when I took the giant leap into the realms of preserving.

Tayberries are a cross between blackberries and raspberries and are much sweeter and larger than the more commonly known loganberry which itself is a blackberry and raspberry cross. They really are delectable fruits, but beware to use gloves when preparing or picking them else you’ll have bright red hands for a while. 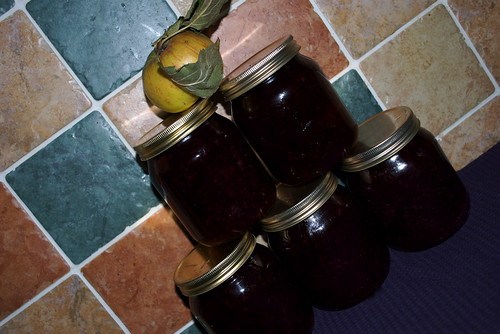 The colour doesn’t show up too well in the photograph but it’s a deep ruby red, almost purple colour, very pretty.

The addition of apples to the jam gave for a firmer set jam without having to use jam sugar, I’d rather be in control of the pectin content myself. They also helped sharpen the jam a little as I’d used windfall apples which are a little on the tart side.

I never realised how easy jam was to make either, very little effort for so much goodness. My preserving pot is now a very busy kitchen item, mind you it needs to be having sat on the pan rack for nearly a year before I plucked up the courage to get preserving; oh the shame of it.

So what to do with a few jars of jam? It had to be a Victoria Sponge didn’t it? Filled with home-made jam and fresh chantilly cream, that had to be the best, no better make that the perfect option. 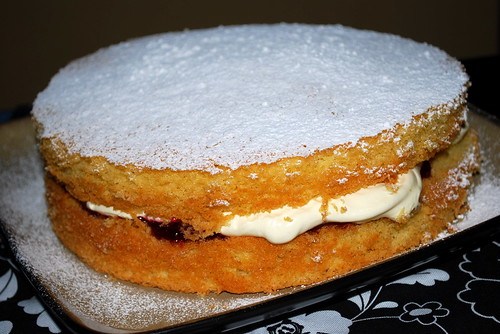 Anna, the Duchess of Bedford (1788-1861), one of Queen Victoria’s (1891-1901) ladies-in-waiting, is credited as the creator of teatime. Because the noon meal had become skimpier, the Duchess suffered from “a sinking feeling” at about four o’clock in the afternoon. She soon began to adopt the European craze of the time – formal afternoon tea with menus centred around small cakes, sandwiches, assorted sweets, and, of course, tea. Sponge cakes became one of her favourites and as such became known as Victoria sponge cakes. Here endeth the history lesson.

Victoria sponges are one of the most basic cakes to make, the cake that many school children begin with in their cookery/home economic lessons but it remains a firm family favourite amongst many and never seems to loose its appeal.

Sponges are based around the creaming method of cake baking i.e. beating softened butter with sugar until it is pale and fluffy, before beating in eggs and folding in some flour and a rising agent such as baking powder. When made well they are incredibly light and fluffy with a gentle spring to them, the lightness comes not from a huge proportion of rising agent but from not being heavy handed when adding the flour, gentle folding actions are all that is needed. It is also very important to add the eggs gradually so as not to curdle the butter which would also lead to a heavy and dense cake.

Although not strictly traditional I prefer the inclusion of chantilly cream to plain whipped cream purely for stability, the added sugar makes the cream hold it’s shape for longer so there is less chance of collapse once assembled. 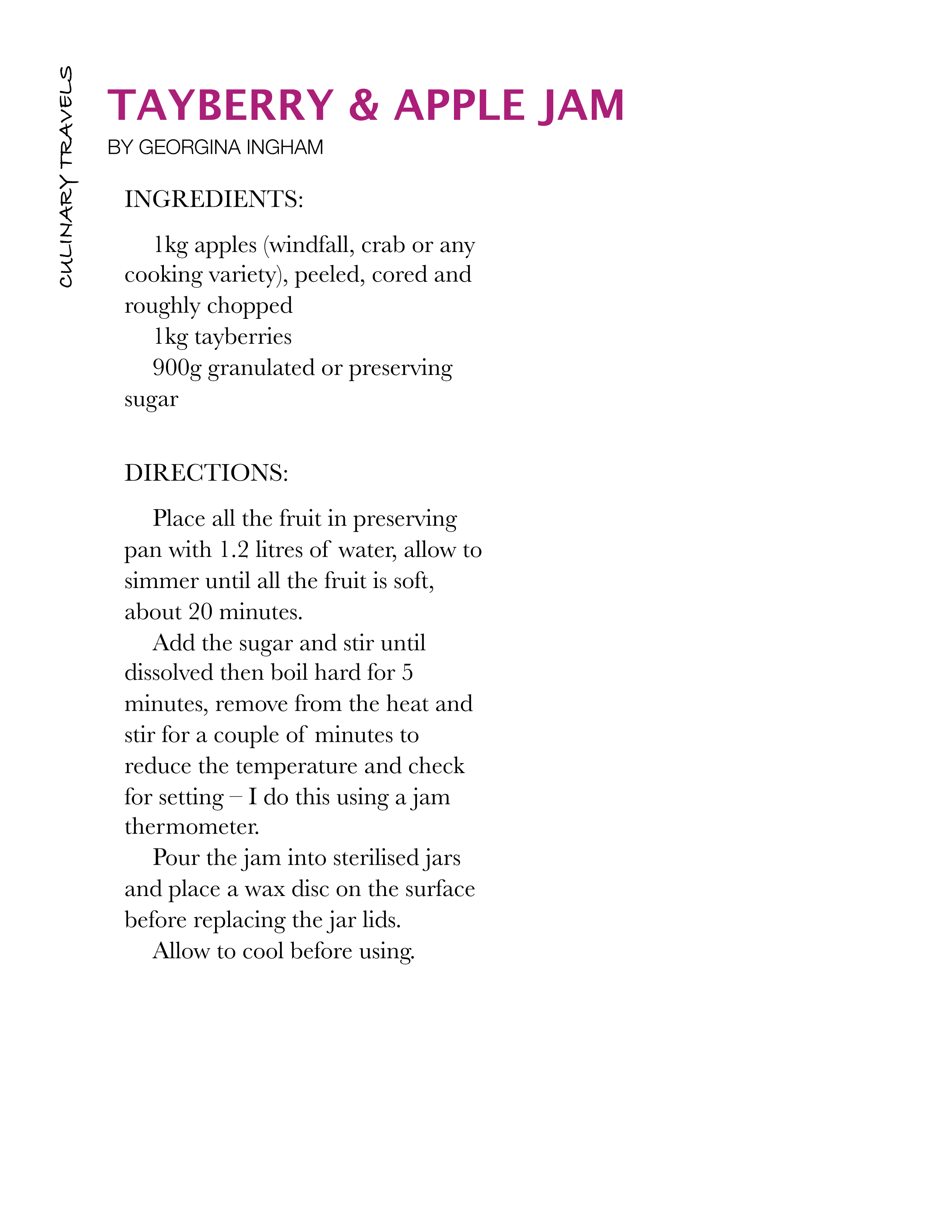 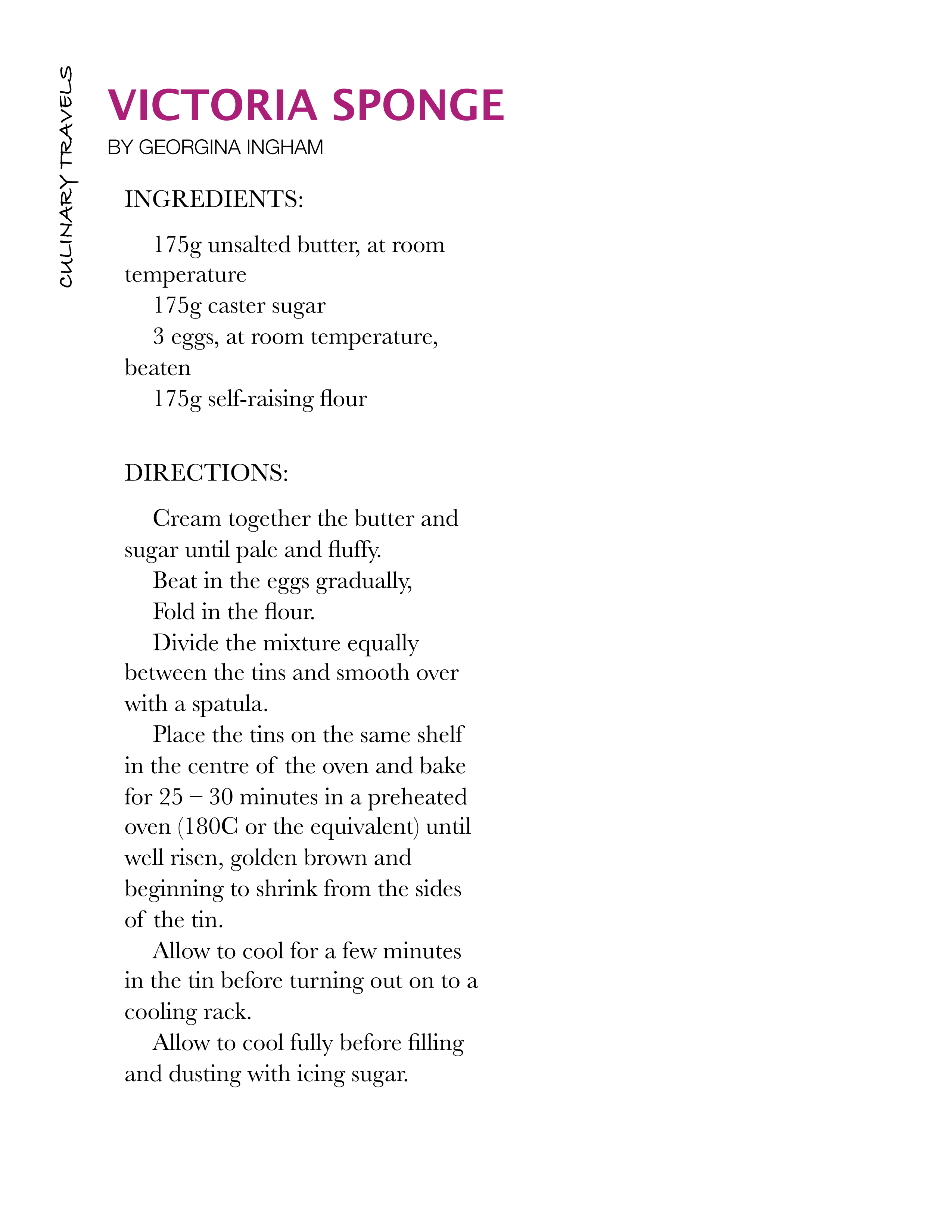