What more could you want to do on a cold autumnal day than potter around the kitchen making warming, seasonal delights? Sounds like a perfect start to the day for me, then I’d go out for a brisk walk with my Irish Setter before coming home to sample the goods, now nothing can beat that, can it?

Well I started with a pumpkin pie loaf cake, adapted from slightly from a recipe I found over on the great blog Elana’s Pantry. I changed the almond flour for half ground almonds and half rice flour, changed the agave syrup for half agave and half maple syrup and baked the mixture in a loaf tin instead, the cake still took around 45 minutes to bake though.

The resulting loaf was so heavy to pick up I thought it would be incredibly dense and heavy to eat but surprisingly it wasn’t. It was however incredibly moist, well flavoured and had such an amazing texture, almost gritty but in a really good way. I think the maple syrup really helped bring out the nature of spices and pumpkin, something about a pumpkin pie loaf is so ‘American’ and it didn’t seem right to leave out the maple even though I know it comes from Canada.

The cake was drizzled with a basic lemon glaze (just lemon juice mixed with icing sugar until the desired consistency is gained) which lent a pleasant tang to the finished cake. 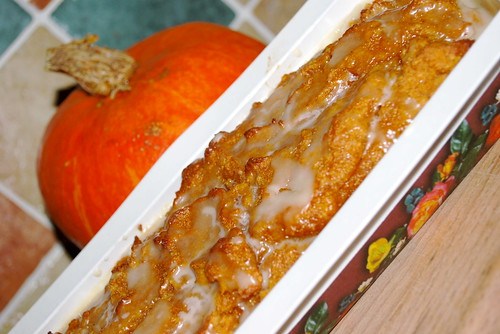 I took the loaf into work and by the following day it had all been eaten, now that tells me one of two things – one the cake was a great success or two my work colleagues aren’t fussy; I hope it’s the first option.