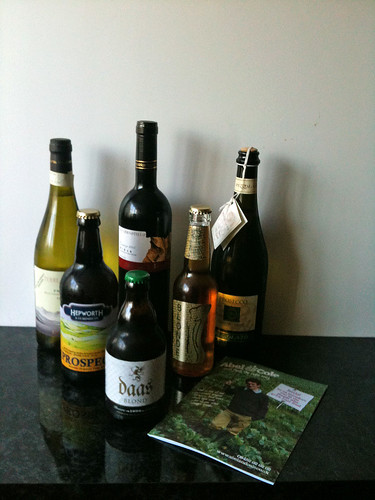 Abel & Cole have very kindly sent me a box of alcoholic beverages to review. Now it will take me a wee while to work my way through all of them, I know, it’s a tough job but somebody has to do it

I know many of you have read about Abel & Cole on the other product review write ups I’ve done for them, such as this one; but for those of you that haven’t do take a look on their website frequently asked questions or give them a call on 08452626262 to find out more.

First up for tasting was the Daas Blond Beer.

Blond beers, also called golden ales range in colour from that of straw to golden blond. This one was definitely a golden blond, unlike wheat based beers blond beers should not be cloudy, this one was a perfectly clear.

Daas is the only Belgian beer brewed in Belgium to carry both the UK Soil Assoc Organic certification and the Belgian Certsys certification. The beer is 6.5% ABV and each bottle contains 2.15 units of alcohol.

To get the best from this honey, spiced aromatic beer it is best to chill it slightly before serving. The beer has a perfect balance of bitter sweet flavours, which is followed by a classic dry hop finish.  Much of the special flavour comes from the fact that Daas Organic beers are “bottle conditioned.” which means that the beer are naturally fermented for a second time in the bottle, in a similar way to the production of Champagne. This results in very light sediment of yeast in the bottom of the bottle.

This is a light and refreshing beer, I would highly recommend it.

When pairing beer and food, one of the most important things to consider is the balance of the beer and the food it’s matched with. This includes the weight and intensity of the food, and the aroma and taste of the beer. When serving a beer with food, it is important to create harmony between the flavors to achieve the desired sensory impact of the beer and the food it’s paired with. Blond beers generally work incredibly well with seafood based dishes that have a European slant to them, such as steamed mussels or baked fish.

Thank you Abel & Cole for the review product.