‘Dear pig, are you willing to sell for one shilling

So they took it away, and were married next day

By the Turkey who lives on the hill.

They dined on mince, and slices of quince,

Which they ate with a runcible spoon;

And hand in hand, on the edge of the sand,

They danced by the light of the moon,

They danced by the light of the moon.’

The Owl and the Pussycat – Edward Lear 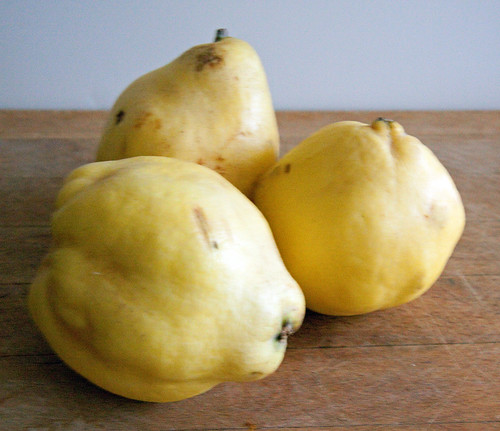 The lumpy, bumpy yellow fruits above, which in fact look a little like mouldy apples, are in fact quinces. Quinces are rather a forgotten about ingredient here, probably because in the UK they can be very hard to get hold of unless you have a friend with a quince tree. A few vegetable box schemes have also begun selling them too; including my suppliers Riverford. Quinces are however having rather a resurgence of interest amongst ardent foodie folk, you should have seen the banter about them over on Twitter and the number of folks wanting recipe swaps, pestering their veg box suppliers for dates of arrival (ok that was me, I admit it); you would have thought we were discussing the last batch of quinces ever to grace our kitchens.

Compared to most modern fruit beauties Quinces are rather the ugly duckling and that probably plays some role in their lack of familiarity and use too. I have to confess I was shocked by the number of people I’ve spoken to who didn’t know what a quince was, yet oddly most of them were familiar with Membrillo (a Spanish quince paste).

Raw quince flesh even looks a bit apple like, pale and insipid really. 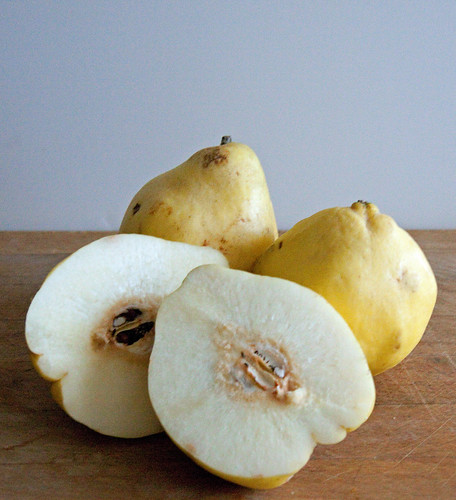 When cooked quinces go a gorgeous spectrum of colours, from pale orange to deep red and they have the most delectable exotic flavour. A flavour that with a little help from some delicate spicing can really sing out of winter warmth.

Despite their looks the quince was actually considered a ‘romantic fruit’ in Medieval times, one to be given at weddings and to romantic partners. Now I’d say that although a box of quinces – fresh or preserved in some way – wouldn’t be my top notch idea for a romantic gift I do believe that a bottle of quince brandy (see recipe below) or home made preserve would be a lovely idea for a Christmas gift.

Quince brandy is quite unlike another other fruity alcoholic drink I’ve had before, it is a lovely deep nectar drink that is a perfect winter warmer. I wouldn’t advise you use a really top of the range brandy as the quince mellows the sharp bite of the brandy, and gives it all those spicy, exotic, wonderful smells, while still retaining the background notes of brandy flavour.