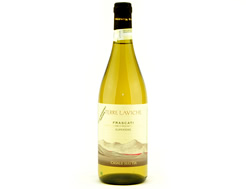 Another drink review for you. This time it is Frascati Superiore ‘Terre Laviche’, Casale Mattia 2006/7 courtesy of Abel & Cole.

The Casale Mattia is situated in the volcanic hills south of Rome, in the epicentre of the Frascati production area.

Frascati is a wine known throughout the world and is the standard-bearer of the wines of Rome. It is produced in the communal territories of Frascati, Grottaferrata and Monteporzio Catone. The district is the “agro tuscolano” or countryside of the ancient, pre-Roman city of Tusculum.

Many Roman legends, literature and popular traditions concerning wine begin and end with Frascati, which is surely one of the best known, most celebrated and mythologized wines in the world. The list of tributes and citations is so long that it puts the literature of other wines to shame.

The Romans referred to it as the Golden Wine both for its colour and its value. It has become embedded in the cultural and economic traditions of the city.

Frascati’s greatest accomplishment may be the lasting effect it has had on the customs of a city that has always been at the center of the world and of the fascination it has exerted over Rome’s innumerable visitors. The city’s famous taverns, of which there were already 1,022 in 1450, were nearly all owned by producers of Frascati wine, who leased them out under contracts resembling the modern franchising agreements of bar, restaurant and fastfood chains.

Good Frascati works really well as an accompaniment to seafood and vegetarian dishes, as well as being light enough to drink as a stand alone item.

Abel & Cole bill this wine as:

“a unique example of how good and flavoursome Frascati can taste, with its beautiful aromas of wild honey and floral notes.”

I unfortunately couldn’t disagree more. The wine was mouth puckeringly sour with a bitter aftertaste. I will concede that the aroma was beautiful, somewhat akin to the smell of a spring meadow, fresh and floral, but that is where the beauty ended. Despite many a trip to Italy I have never come across a Frascati like this before. Usually they are soft, limpid, golden and tasting of fresh grapes; this one tasted old – so hard-edged and sour it was barely drinkable.

Wondering if it was just that the wine didn’t suit my tastebuds or that I was having an off day for the tasting I decided to ‘blind taste’ the Frascati amongst some of my friends and family; all of them gave poor reviews.

After a little research I’m left wondering if the bottle was maybe a ‘defect’, as all the reviews I’ve managed to locate are incredibly positive.