Unless you have been hiding yourself away from the foodie scene these last few years I’m sure the hype surrounding the St. John Restaurant cannot have escaped your notice. The offer of a meal there would I’m sure be as poll dividing as Marmite – love it or hate it, sure, nose to tail eating isn’t for everyone. Me? Well, I’d be leaping for joy, this is one of the many must visit restaurants I have listed.

Over on Twitter recently there seems to have been a lot of talk about the St. John Restaurant, most of it excellent and most of it around mouth-watering fayre. Catty on the other hand didn’t have such a great experience but hey as she points out, sometimes the hype and build up of excitement can easily take the edge of something no matter how good it was.

And. Back to me. All this chatter, and the chance buy of some lovely oxtail, got me in the mood to try out Nose to Tail Eating: A Kind of British Cooking by Fergus Henderson (one of the founders of St. John Restaurant). 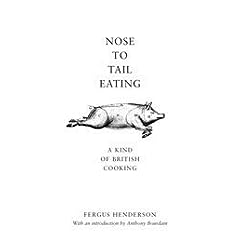 A lovely book which I have read and pondered over many times but had yet to actually cook from. Somewhat shockingly however it did not include a recipe for oxtail. Now, I could either find another recipe book or find a recipe in Nose to Tail Eating that I could adapt; I did the latter – Lamb Shanks Eben’s Way, almost leapt out of the page; the flavours included and the method of cooking would most certainly work well with oxtail.

Just to be on the safe side though I contacted St. John Restaurant via the masterpiece of social medial that is Twitter and asked their advice. They advised the addition of prunes, and so prunes were added; along with a few carrots as I had some to use up.

Oxtail is a boney, gelatinous meat; now that doesn’t sound all that appealing really does it? However, the meat has a fabulous flavour, very deep but sweet and cooked well it is fork tender, yet remaining well textured. If you or your family are a little put off by the eating of the tail, why not do as I did for my family and remove the bone prior to serving?

Whereas oxtails used to be considered a “throwaway” meat, often free for the asking or close to it, you may have to put an order in ahead of time as it is becoming increasingly popular these days. The recipe itself also needs to be planned a few days ahead, it is by no means quick. But don’t be put off — most of this time is taken up with waiting while the oxtail marinates and slow-cooks

The long marinade (in a bottle of red wine amongst other spices) not only allows the flavours to permeate the meat but aides in the tenderising of it too. This marinade is then joined by a good slosh of port and reduced down to a sauce for the meat prior to serving; the flavours really do bring out the best in the oxtail, which by this point is almost ‘gamey’ in its strength of flavour.

Now get that oxtail on order! 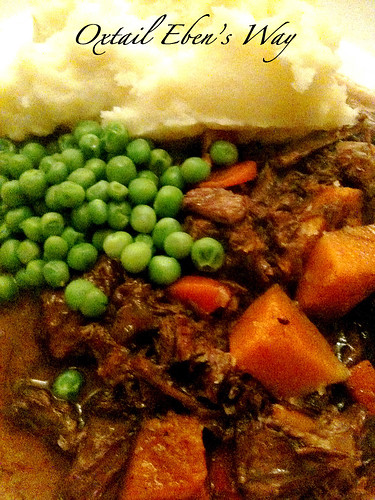 I ate the leftovers for lunch the following day and it tasted even better (as do most stews) than on the day of cooking. Be aware though that the stew will become very gelatinous and solidify on getting cold, just reheat it gently and all will be fine.