After taking a couple of months break from the Daring Bakers (due to work commitments & having a domain change) I am glad to say I’m back in the group of participants; and what a lovely challenge I returned too.

The January 2010 Daring Bakers’ challenge was hosted by Lauren of Celiac Teen. Lauren chose Gluten-Free Graham Wafers and Nanaimo Bars as the challenge for the month. The sources she based her recipe on are 101 Cookbooks and www.nanaimo.ca. 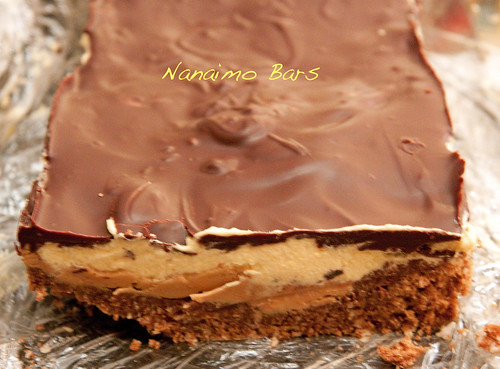 Nanaimo (for those of you not in the know, it is pronounced Nah-nye-Moh) are one of Canada’s best known confectionary treats.

The City of Nanaimo, British Columbia lays claim to these squares, claiming on their website that it all began when a Nanaimo housewife entered a recipe for chocolate squares in a magazine contest some 35 years ago.

The challenge couldn’t really have been easier, perfect for easing me back into the swing of Daring Baker life.

Nanaimo bars are a no bake chocolatey treat. All Nanaimo Bars begin with a base layer of a combination of cocoa powder, chopped nuts, coconut and graham cracker crumbs held together with melted butter. Once this mixture is pressed into a square pan and chilled it is then covered with a rich layer of custardy buttercream and topped with melted chocolate. I added a layer of peanut butter to one of my batches too, giving a resulting flavour not all that dissimilar to Reeses peanut butter cups.

The vital part of the butter-cream is the dried custard powder, which was the invention of Englishman Alfred Bird. He invented this powder because his wife loved homemade custard but was allergic to eggs. Alan Davidson in his “The Oxford Companion to Food” goes on to say that this powder is not, in fact, a dried form of real custard but is just cornflour (cornstarch) and sugar that has been coloured and flavoured. When the dried custard powder is used in this buttercream it adds a lovely flavour and it also turns the cream a soft yellow shade – or at least it once did, Birds now it seems have removed some of the colourants from the powder which is all well and good in terms of making our food more natural but it doesn’t bode well for the colouring of these bars.

Much I would have liked to go down the gluten free route for making the graham crackers I just couldn’t locate some of the flours locally, so I ended up using whole wheat pastry flour and very well it worked too. However, if anyone knows of a UK source for sorghum flour I would love to hear about it so as I can try the gluten free version too. It only occurred after making them that I could have tried using gluten free white flour but I presume that would have changed things far too much.

The use of a square pan ends up making quite a few bars and because they’re so rich you’ll want to cut them small. Plus, cutting them small has the added benefit of making you think you’re not consuming any calories of note and therefore you can eat that second helping, and trust me, you’ll want to. 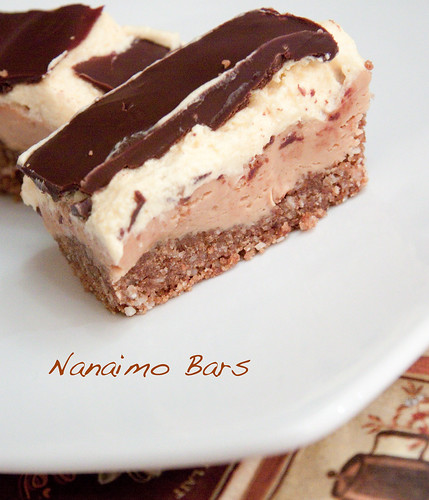