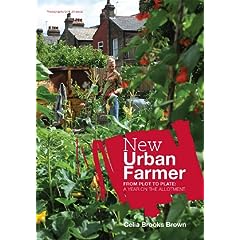 The New Urban Farmer by Celia Brooks Brown is due for publication in early March 2010. I am sure it will take the market by storm. How can it not? It is surely a gem of a book and one most suited to the current trend of growing your own food.

This book is billed as “a year-round guide to growing your own vegetables and fruit, so that you can enjoy the incomparable taste of homegrown produce, with over 60 delicious recipes” and it really doesn’t disappoint.

Before discussing the book in more detail, happen a little background to growing your own might be helpful.

Prior to the Second World War Britain imported roughly 55 million tons of food a year from other countries; but during the war this simply was not a viable option.

The Ministry of Agriculture launched one month on from the outbreak of the Second World War, one of the most memorable slogans of the whole conflict – ‘Dig for Victory’.

From this point on, the whole of Britain’s home front were encouraged to transform their private gardens into mini-allotments. It was believed, quite rightly, that this would not only provide essential crops for families and neighbourhoods alike, but help the war effort by freeing up valuable space for war materials on the merchant shipping convoys. Indeed, over just a few months, Britain saw its green and pleasant land transformed with gardens, flower beds and parkland dug up for the plantation of vegetables.

By 1943, over a million tons of vegetables were being grown in gardens and allotments.

During the course of the war, many propagandist moves were made to promote the importance of ‘growing your own’. Along with the circulation of familiar Ministry of Agriculture ‘food flashes’, literature and poster displays, anthems were also introduced.

Not only vegetable growing occurred though; people were encouraged to keep livestock too. Chickens were incredibly popular but, others kept rabbits and goats. Pigs were popular as they could be fed on the kitchen waste of several families and then, once slaughtered, the meat divided.

After the War Britain began to return to normality, gardens returned to being just that and flower beds reigned once more; however, the practice of keeping allotments continued to thrive. One wonders if it was the ample supply of fresh food or the escapism from everyday life (or more to the point ‘her indoors’) that kept the activity alive.

Vegetable-growing in Britain declined sharply in the 1980s and 1990s as cheap all-year-round vegetables in supermarkets took prime position; thus giving rise to a steep decline in the importance of locality and seasonality to the average British consumer. Gone were the thoughts of meal planning around the seasons and in was the notion that eating food from far flung corners of the globe was exotic and highbrow. Name dropping of food items and the selection of wild and wonderful combinations of such ‘exotics’ became de rigeuer at social gatherings. The fact that most of the out of season, flown in, items were lacking in both taste and texture was of a matter of insignificance .

The noughties have definitely been a decade of food trend change though, as both Thompson Morgan and Suttons Seeds have noticed a rising trend in the past five years and say they have seen a jump towards vegetables from flower seeds this year in particular, with edible varieties accounting for between 60 and 70 percent of total sales.

Jamie Oliver seemed to spark the trend to return to home grown with his 2007 book Jamie at Home; which contained snippets of gardening info hidden amongst the recipes. Oliver said:

“I’m so into the whole growing thing these days that it now seems strange that, having been a chef for 16 years, I didn’t get into it sooner. …

… So Jamie At Home is all about getting down and dirty with nature, growing and cooking your very own produce – whether from your garden, allotment or window box. It’s easier than you might think and fantastically rewarding if you get it right.”

With allotment waiting lists massively oversubscribed and people right across the country keener than ever to grow their own fruit and veg, Hugh Fearnley Whitingstall set up the Landshare initiative. The aim for Landshare is to become a UK wide initiative to make British land more productive and fresh local produce more accessible to all. Each of the new growing spaces are to be registered through the Landshare website  as an online ‘matchmaking’ database of keen growers and those who have land available.

The National Trust is also creating 1000 new plots in the next three years to provide for the growing number of ‘growing your own’ fans.

Throughout this book Celia Brooks Brown brings the theory of growing vegetables to an approachable reality, using real life tales of her adventures in vegetable growing such as doing battle with the slugs and snails over the brassicas and spotting the first emergence of that springtime delight, asparagus.

The gardening advice is clear, easy to follow and to be truthful you don’t need to have ‘green fingers’ to understand the details; a problem I have found with many other books covering this subject.

The addition of simple yet delicious recipes (such as cauliflower & coconut soup, smoky gazpacho and simple tomato sauce) does of course make the book even more appealing to the keen cook.

The book is beautifully presented on thick, glossy paper that cries out to be held but appears tough enough to stand up to everyday life in the kitchen or even the odd occasion surrounded by soil and seeds (although I’d heartily recommend you make notes and take an old notepad out to the allotment rather than this paperback beauty).

One particular delight is that the book is divided into the four seasons, and then delightfully subdivided into individual months detailing what is in season, what to start planting and a few mouth-watering recipes.

The photography, well that is stunning, full page spreads of perfect vegetables, lovely shots of Celia in her allotment.

I have a fair sized garden with enough room for some vegetable growing, but, simply reading this book has made me long for an allotment; such an inspiration it is.

With thanks to Quadrille Publishing Ltd for the review copy.