ODE TO A HAGGIS

Great Chieftan o’ the Puddin-race!
Aboon them a’ ye tak your place,
Painch, tripe, or thairm:
Weel are ye wordy of a grace
As lang’s my arm

The groaning trencher there ye fill,
Your hurdies like a distant hill,
You pin wad help to mend a mill
In time o’need
While thro’ your pores the dews distil
Like amber bead

His knife see Rustic-labour dight,
An’ cut you up wi’ ready slight,
Trenching your gushing entrails bright
Like onie ditch;
And then, O what a glorious sight,
Warm-reeking, rich!

Then, horn for horn they stretch an’ strive,
Deil tak the hindmost, on they drive,
Till a’ their weel-swall’d kytes belyve
Are bent like drums;
Then auld Guidman, maist like to rive
Bethankit hums

Is there that owre his French ragout,
Or olio that wad staw a sow,
Or fricassee wad mak her spew
Wi’ perfect sconner,
Looks down wi’ sneering, scornfu’ view
On sic a dinner?

Poor devil! see him owre his trash,
As feckless as a wither’d rash
His spindle-shank a guid whip-lash,
His nieve a nit;
Thro’ bluidy flood or field to dash,
O how unfit!

But mark the Rustic, haggis-fed,
The trembling earth resounds his tread,
Clap in his walie nieve a blade,
He’ll mak it whissle;
An’ legs, an’ arms an’ heads will sned,
Like taps o’ thrissle

Ye pow’rs wha mak mankind your care,
An’ dish them out their bill o’fare,
Auld Scotland wants nae skinking ware
That jaups in luggies;
But, if ye wish her gratefu’ pray’r,
Gie her a Haggis!

A couple of weeks back I made a mammoth journey to Scotland to collect our new family member Maximus, and back home in the same day — a journey that took over ten hours.

On the journey north a breakfast break was taken at a fabulous farm shop come service station. After a hearty, if rather expensive, breakfast I just had to take a wander around the farm shop. Sure it would be rude not to peruse the goods for sale wouldn’t it? I ended up buying some local cheese, a couple of pork pies and bread (food for the journey home) and, a haggis. Not just any haggis mind you, but a Rick Stein Food Hero haggis.

So what is a haggis? Well, without wanting to disappoint anyone, it is not the mythical furry creature with its two inside legs shorter than its two outside legs to allow it to run easily along hillsides. Haggis is in fact a very old Scottish dish, which combines meats, spices and oatmeal to create a very rich, unusual, but nonetheless delicious meal. 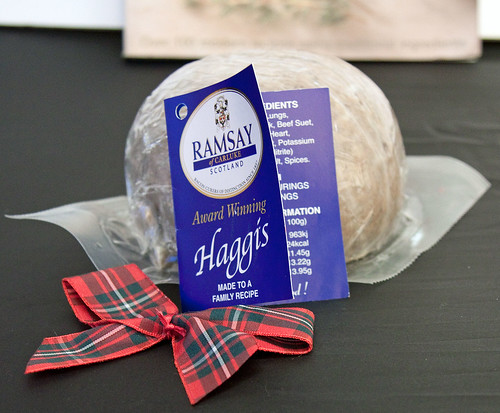 The origin of haggis, as with many other national dishes, is obscure. A similar dish was known to the ancient Greeks and Romans and is mentioned in some 14th-century Scottish chronicles. Dr. Michael Krause, a physician from Hamburg reported that it was much like a Silesian dish he called ”derma.” And although haggis includes pork fat or suet, its taste and texture also resemble the Jewish dish made of chicken fat, flour, spices and onions baked in a steer’s intestines that is also called derma.

The French honour its Scottish connections by calling it ”Puding de St. Andre” although, in fact, the word haggis is probably French in origin and comes from the verb hacher — to chop up or mangle. Though unproven, the French origin seems likely as French influence was strong in Scotland until 1603 and other traces of that tongue remain in the Scottish lexicon.

What to serve with the haggis? Well, ‘neeps and tatties’ would be the obvious choice but I wanted something a little different, nothing too out of the traditional realms of Scottish cuisine though. Rumbledethumps seemed the obvious choice, and, isn’t the name just lovely. 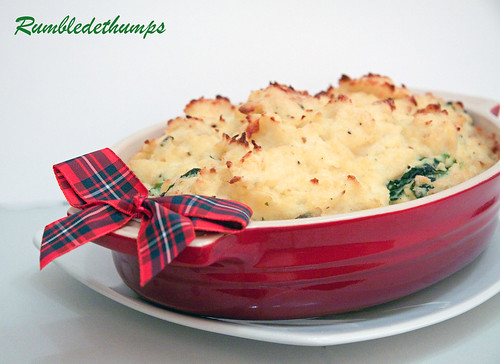 Rumbledethumps is a traditional dish from the Scottish Borders. The main ingredients are potato, cabbage and onion or  swede depending on which recipes you care to look at. Similar in nature to Irish colcannon, and English bubble and squeak, it is either served as an accompaniment to a main dish or as a main dish itself. An alternative version from Aberdeenshire is called kailkenny which replaces the butter in the potatoes with cream.

The name rumbledethumps apparently comes from the noise made in the kitchen as the tatties and cabbage are rumbled and thumped in the preparation.

Contrary to Tim Hayward description of Rumbledethumps (found here) that they are “potatoes and cabbage knocked about a bit in a pot – just to ensure the ultimate disheartening combination of lumps, bruised, leathery brassicas and self denial.” I found them luxuriously creamy, fresh and vibrant – note though that I added a dash of cream to the process and mashed away at the potatoes until not a lump could be found; before folding through quickly sautéed strips of kale. A culinary pleasure indeed.

The recipe I used for the rumbledethumps comes (in an albeit slightly adapted way) via Sue Lawrence’s Scottish Kitchen; an absolute treasure-trove of recipes which emphasises all that is good about Scottish cooking.

Of course you need a wee dram of whisky to accompany your dinner. 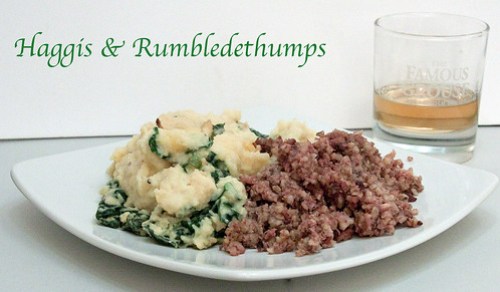