After Christmas I made a promise to myself that I would resist buying more cookery book until I had sorted and organised the rather mammoth collection I already own. Well, a couple of weeks back I broke that promise. How could I resist Jose Pizarro’s stunning book, Seasonal Spanish Food?

Pizarro’s debut explores the regions of Spain and is embellished with lovely anecdotes about the rural upbringing of the author — the chef behind the esteemed London tapas restaurant, Brindisa.

Pizarro’s infectious enthusiasm for Spanish cooking permeates every page. His message couldn’t be simpler — use fresh, good-quality, seasonal ingredients and they will speak for themselves.

You might not be familiar with Pizarro but the fact that the Spanish Ambassador offered him the Embassy in which to hold his launch party tells you all you need to know about the regard in which he is held by his countrymen.

One of the recipes that stood out immediately was Chickpeas with Chorizo. Pizarro describes this as a cross between a soup and a stew but I decided to keep it soupier, adding extra stock. 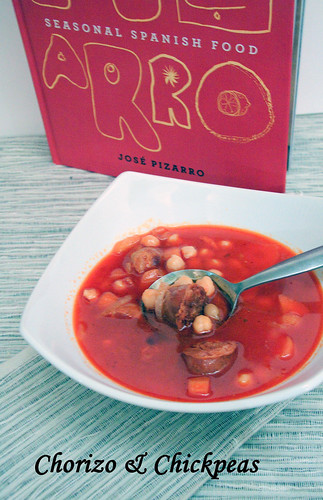 The chorizo I used came from Unearthed – a lovely and much appreciated free sample! Unearthed cooking chorizo is a spicy Spanish pork sausage with paprika and garlic, sourced very near Barcelona.

The original chorizo probably was invented in Extremadura, which is hardly surprising given that the monks in that region were one of the first to cultivate the peppers brought back from Mexico.

Chorizo is a pork sausage that has been spiced and marinated, then cured for a varying amount of time. The key ingredient is the pimenton, of which there are varying degrees of spice/heat and the type used varies from region to region.

Chorizo, as with all meats, depending on whether you buy it from a specialist shop, or a supermarket, will vary enormously in taste, texture and quality, but can be relied on to send waves of vibrant, husky warmth through a cheap bean or dried pea stew. What I’m trying to say here, is buy the best chorizo you can afford, the rest of the ingredients are cheap and cheerful so splash out on the most vital of ingredients.

While I’m on my soap box about buying good quality ingredients, I might as well mention that I would recommend fresh home-made chicken stock here, or at a pinch a tub of fresh stock from the shops. Please no stock cubes here.

As per my usual preference I used dried chickpeas which I soaked overnight. Jose also recommends doing this, as the flavour of tinned chickpeas is never as good as dried and they are such a prominent feature of this dish it would be such a shame to make do with inferior quality/flavoured goods. 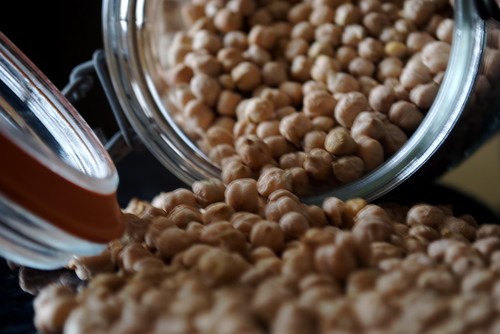 Chickpeas have two lovely qualities that make them suit rustic, slow cooking — their near-indestructibility and an agreeably knobbly feeling in the mouth. They also have a lovely nutty flavour which works so well against the spicy, paprika notes of the chorizo and of course the rust coloured stock in which it all sits amicably.

A quick and hearty soup, which should be on the table in about an hour, for most of which time it can sit unattended, with just the occasional stir to see how it is getting on. It is also delicious reheated, so perfect for lunch the next day too. Some crusty bread wouldn’t go amiss but it is by no means essential. 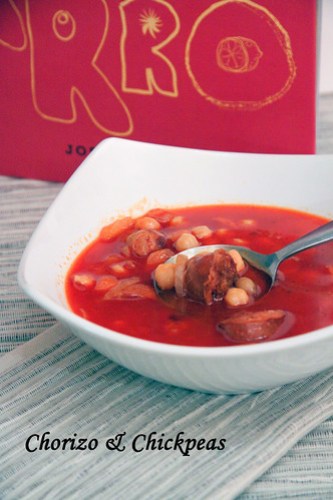