The February 2010 Daring Bakers’ challenge was hosted by Aparna of My Diverse Kitchen and Deeba of Passionate About Baking. They chose Tiramisu as the challenge for the month. Their challenge recipe is based on recipes from The Washington Post, Cordon Bleu at Home and Baking Obsession.

Tiramisu is one of my favourite desserts, and one that I have to admit regularly disappoints me when eating out. All too often the tiramisu comes soggy, with the biscuits practically disintegrating in front of your eyes, when in fact the savoiardi should literally be ‘kissed’ with the top notch espresso.

Everybody knows by now that Tiramisu means “pick-me-up” in Italian, for the high energy content (eggs and sugar) and the caffeine of the strong espresso coffee, but what do we know about the history of Tiramisu?

Tiramisu is said to have its origins in Treviso (Italy), and there are quite a few stories about how it came to be created.

One story traces the tiramisu as far back as the Renaissance claiming that it was first made in honour of the visit of Grand Duke Cosimo di Medici to Tuscany. Yet another one points to the tiramisu being an adaptation of the “Zuppa Inglese” referring to the sponge cake and cream layered English Trifle.

However, experts in this area generally agree that the tiramisu as we know it today, was born in the ‘70s.
Some believe that the Tiramisu was created in the the Le Beccherie (a restaurant in Treviso). Others suggest that Tiramisu was first made in 1971 by an Italian baker named Carminantonio Iannaccone in a small bakery in Treviso, Italy.

The process of making a tiramisu is quite time consuming but it no component part is particularly difficult to do.

I’ve made a few cheeses (most frequently ricotta) before and creme fraiche, but, mascarpone was new new ground. The process though was incredibly simple and the result was so much better than any mascarpone I have ever bought in the shops – so much lighter and creamier. Another bonus was that it actually worked out cheaper than shop-bought too.

The trickiest bit? Definitely had to be the zabaglione, purely because of the fact that it takes so much whisking. Happen I should have gone for the modern route of using the electric whisk but I decided to give my arms a workout and use a balloon whisk. Somewhere deep in my subconscious mind I suppose I was weighing up the fact that calories burned in the tiramisu preparation might just mean I could eat a slightly bigger piece of the finished dish, guilt free.

Would I make another tiramisu using this recipe? Oh yes, definitely – this is most certainly Heaven on a Dessert Plate.

Although before I do I am just going to have to try Tiramisu di Sergia from Tessa Kiros’ Venezia Food & Dreams, which uses sweet vermouth and amaretti biscuits. 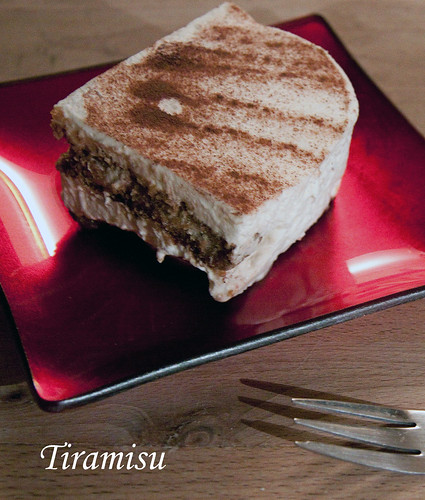