Laura Santtini’s passion for food comes from her Italian grandmother and her parents who launched the Italian restaurant Santtini’s in Belgravia, (which was famed for being Frank Sinatra’s all-time favourite eatery). As an avid cook she has mastered the skills required in transforming every day Italian dishes into unforgettable and simply magical food.

In her book, Easy Tasty Italian, she aims to transform your cooking style, claiming your cooking will never be the same again! 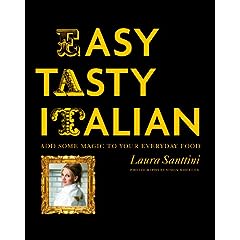 In section one of the book, Laura reveals the secrets of her larder and how to make the most of the powers of umami, the recently identified fifth taste. She then delves into the potential of basic procedures and preparations such as whipping, chopping and pounding, in order to create ‘flavour bombs’ — intense combinations of ingredients that lift simple recipes to new heights of deliciousness. For example she covers a simple recipe such as a red wine marinade before revealing seven spectacular transformations of the original, including mocha chilli barbeque or orange anchovy and cinnamon marinade. Her basic recipe for salsa rossa evolves into pink grapefruit, fennel and pomegranate relish whilst a basil pesto is altered to create a more refreshing rocket, mint and pistachio pesto.

This form of laying out recipes continues into the second section, which covers cooking methods described as Air (antipasti, carpaccio, ceviche and dips), Water (soups, pastas and sauces, risotto and poaching), Fire (grilling, frying, baking and roasting) and Earth (slow cooking and vegetable dishes). Following the ‘elemental section’ is a very small section on vegetable side dishes and following on, the desserts section contains a mere twelve recipes.

There is something a little indigestible about this book. Yes, the recipes sound delicious, the illustrations are succulent and the writing often appetising, in a quirky kind of way; but the essence of a good food book is, well, the food. Admittedly, a good food book can occasionally be something other than a cook book — think Larousse Gastronomique for example; but, for me, Santini overcooks her prose and strays beyond the mark on a few occasions. References to the popular music of her youth, dire puns (‘hey pesto’) and to her relationships (‘this one lasted longer than my marriage’) are just plain distracting and irritating.

The revolutionary core of the book, and its saving grace, is its exploration of the ‘alchemy’ of umami! This may be a cunning sales ploy (given that Santini has produced Umami pastes, which are sold by Selfridges), making us worry that we’re missing out on some radical new discovery, but the combination of spaghetti bolognese and Parmesan cheese used to illustrate the idea has been known about and appreciated for centuries.

This book was not what I was expecting and I doubt anyone who judges a book by its title alone will expect either. I actually think naming this book Easy Tasty Italian is quite misleading.

While the book often looks great, I don’t feel overly enthused to cook from it as it feels a little too chaotic, hard to follow and a bit too girly for me, with all the gold-dust and glitter references, etc. It’ll probably spend more time on the coffee table than in the kitchen.

With thanks to Quadrille Publishing Ltd for the review copy.