“Train up a fig-tree in the way it should go, and when you are old sit under the shade of it.” 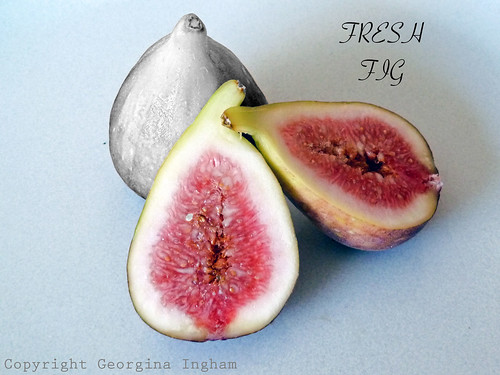 Figs are such a strikingly beautiful fruit, with their fresh green or deep purple skin and vibrant deep pink flesh what is there not to love?

Fresh figs always remind me of holidaying in Turkey. We stayed in Gumbet long before it became a clubbers paradise – when we visited Gumbet was still a traditional, small fishing village on the Aegean Sea.

The nearest town, Bodrum, was by contrast a hive of activity with regular bustling markets selling everything from livestock, to fruit and vegetables, to herbs and spices, right through to clothing and household items. Cafes and restaurants lined the seemingly ever sunny sea front, but, for the best food we headed further into the centre of Bodrum, to small family run places dotted throughout the narrow side streets, many shaded by fig trees and palms.

I certainly made the most of having the luscious figs at my fingertips throughout the stay, eating them at every available opportunity whether just as a healthy snack or as part of a meal. There is little better than the fig tree’s produce when it is fresh and still warm from the sun.

Even during my young teenage years I appreciated the beautiful scenery, culture and above all the food! It was probably that holiday that sparked my long lasting love of Middle Eastern influenced food.

Anyhow that is enough about me and my holidays. Back to the figs.

Figs can be traced in history back to the earliest of times with mentions in the Bible and other ancient writings. They are thought to have been first cultivated in Egypt. They spread to ancient Crete and then subsequently, around the 9th century BC, to ancient Greece, where they became a staple foodstuff in the traditional diet. Figs were held in such esteem by the Greeks that they created laws forbidding the export of the best quality figs. It is also claimed that Plato told the Greek athletes to eat lots of figs to aid their performance. Figs were revered in ancient Rome where they were thought of as a sacred fruit, according to Roman myth, the wolf that nurtured the twin founders of Rome, Romulus and Remus, rested under a fig tree.

Figs were later introduced to other regions of the Mediterranean by ancient conquerors and then brought to the Western Hemisphere by the Spaniards in the early 16th century. In the late 19th century, when Spanish missionaries established the mission in San Diego, California, they also planted fig trees. These figs turned out to be inferior in quality to those that were imported from Europe, and it wasn’t until the development of further cultivation techniques in the early 20th century that California began focused cultivation and processing of figs. Today, California remains one of the largest producers of figs in addition to Turkey, Greece, Portugal and Spain.

Fresh figs are very delicate and tend to deteriorate quickly. When choosing fresh figs, select those which are plump and tender, have a rich, deep colour, are free from bruises and are not mushy. Even the best quality figs will only last a couple of days in the fridge after purchasing.

Figs are high in natural and simple sugars, minerals and fibre. They contain good levels of potassium, calcium, magnesium, iron, copper and manganese. Dried figs contain an impressive 250mg of calcium per 100g, compared to whole milk with only 118mg. 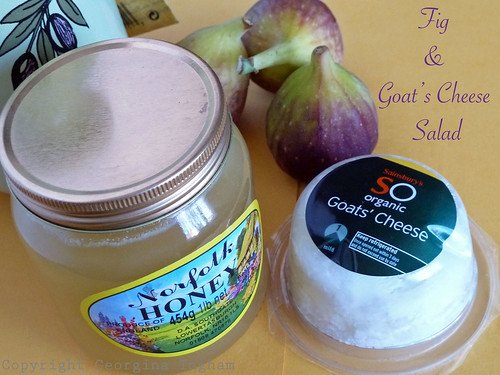 Figs and goats cheese is a combination to die for. Fresh sweet figs against the salty cheese is amazing, add in a sweet olive oil and honey dressing with a few mixed leaves and you are heading towards salad perfection. Only the addition of some prosciutto could possibly improve this.

Although the figs were imported from Turkey, everything else was pretty locally sourced – honey from Norfolk, goat’s cheese from the UK although no more information was provided (as a side note the So Organic cheese from Sainsbury’s was surprisingly good) and salad leaves from my garden. The olive oil came from Spain via last years Ludlow Food Festival; I hope to go again this year and would suggest any foodies who have the chance to make the journey too. 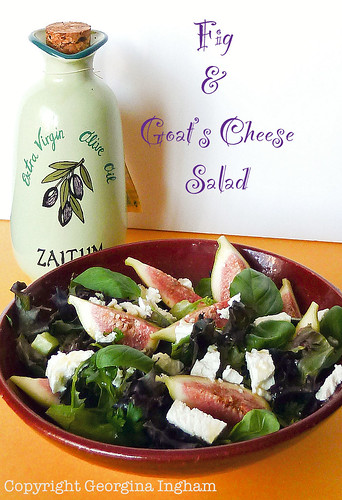