Sometimes Sundays should just be about big old fry-ups and mugs of tea.

With a fresh supply of both Clonakilty black and Clonakilty white pudding in my fridge, a large box of Bewley’s tea and some fresh from the farm eggs, what more of an excuse did I need? 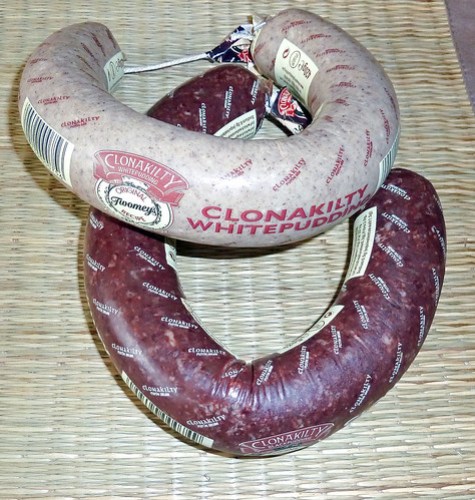 Clonakilty’s famous black pudding, comes from the butcher Edward Twomey in the middle of the town on Pearse Street. Edward Twomey bought the butcher from Harrington family, and to this day the pudding is manufactured to the original Harrington recipe prepared in 1880. The most unusual characteristic of the black pudding is that, unlike most traditional UK black puddings, it does not contain pork – it is in fact 24% oatmeal, beef fat, onions and a secret spice blend! 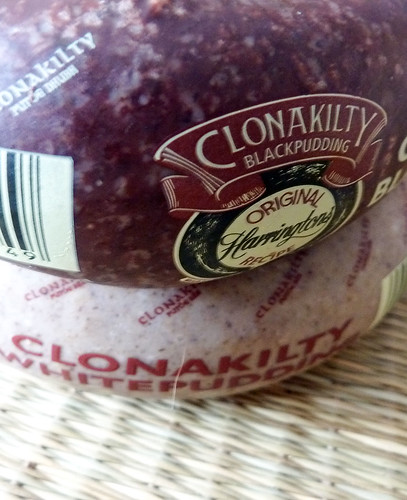 Clonakilty pudding white & black received gold and bronze in the great tastes awards in 1999, in the sausage category in London.

I was going to follow Niamh’s great lead and make soda farls. But, the presence of some left over mashed potatoes stopped me in my tracks. I decided to go for potato cakes. Potato cakes hold some fond memories for me – namely the eating of a great many of them at the Farmgate Cafe in Cork’s magnicient English Market.

Traditional Irish potato cakes are simplicity itself – boiled potatoes, melted butter, flour and salt, mixed together, sometimes with a little milk, shaped into wedges or patties and cooked on a griddle, baked or fried. Depending on which part of the country you’re in, they are referred to (interchangeably) as potato cakes, potato farls, potato bread, slim or fadge. Regardless of what they are called, they are as indispensable to the Ulster Fry as bacon and eggs, but, as Biddy-White Lennon notes in her Best of Irish Potato Recipes, they are not part of the classic Full Irish Breakfast lineup; more’s the pity.

On an interesting note though, boxty (one of Northern Ireland’s most famous potato cakes) contains a mixture of grated and mashed potatoes – all the others are purely mashed potatoes. A famous Irish rhyme demonstrates the importance once given to the dish by the traditional cook:

Boxty on the griddle,

Boxty in the pan,

If you can’t make boxty,

You’ll never get a man!

The recipe I used for the potato cakes was adapted from Carmel Kavenagh’s recipe for slim in Traditional Irish Cookery. 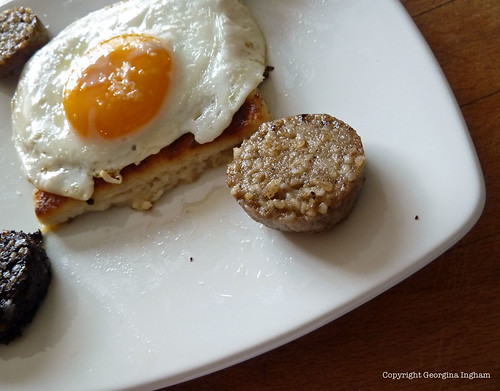