Whisky is a shortened form of usquebaugh, which the English borrowed from Gaelic (Irish uisce beatha and Scottish uisge beatha). This compound descends from Old Irish uisce, “water”, and bethad, “of life” and meaning literally “water of life”.

I recently received a lovely gift box of award winning Irish Whiskey. Although difficult, obviously, a choice had to be made regarding which one to taste first.

I plumed for the Connemara Peated Single Malt. It just sounded so unusual and yet so appealing. 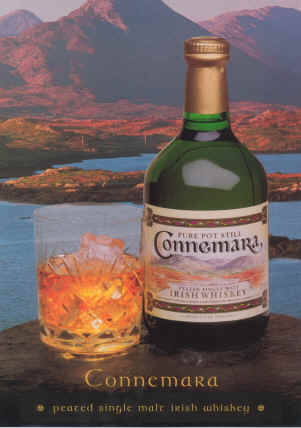 Connemara is one of nature’s masterpieces. The rugged Atlantic coastline and majestic mountains blend with the rain-soaked peated bog lands to create a landscape of unique natural beauty.

To have a peated Irish whiskey is quite a rare thing indeed.

Despite peat being native to Ireland it took a collaboration between Cooley distillery and Scottish distiller Gordon Mitchell (who later founded Arran distillery in Scotland) before the first peated Irish whiskey was introduced.

Peated whiskies are gauged on their level of smoke by something called “phenols per million”, which is an indication of just how much smoke has been added to the single malt barley. Islay, a region of Scotland renowned for big, peaty whiskies, averages about 30 ppm while Connemara comes in at a milder 13-14 ppm. meaning that while there is an element of smoke inherent in this whiskey, the smoke plays more of a supporting role than being front and center on the palate.

Nose: Smokey and peaty offset by floral heather notes and intermingled with hints of honey and oak.

Taste: Silky smooth with a honey sweet start, followed by more complex aromas of malt and fruit giving way to the intensifying and warming full bodied peat. A well-balanced yet complex taste with vanilla oak notes.

Finish: A long and glorious finish with golden honey notes and deep peat spreading across the mouth and palate. Hints of vanilla and oak leave a mouth-watering taste!

Serving Suggestions: Connemara can be enjoyed neat or with a little water, but this certainly isn’t one to use with a mixer.

Country of Origin: Republic of Ireland