If a little dreaming is dangerous, the cure for it is not to dream less but to dream more, to dream all the time. Marcel Proust

When Aoife posted a recipe on her fantastic blog for feta cheese my mind was immediately transported back to holidaying in Corfu.

Now the holiday itself was a bit of a disappointment, mainly because of my teenage lack of appreciation at a rural holiday. But the food? Well that was something else altogether. Long, lazy lunches sitting in the shade, watching the world go by.

It was in Corfu that I ate my first true “Greek Salad”, tasted stifado and dolmades, and got a real taste for the cuisine of Greece. One of my favourite dishes was a vibrant mixed vegetable stew that came topped with a plentiful supply of crumbled salty feta and oodles of fresh herbs.

After the having the Proustian moment, I just had to try my hand at making feta and the vegetable stew. How could I not? 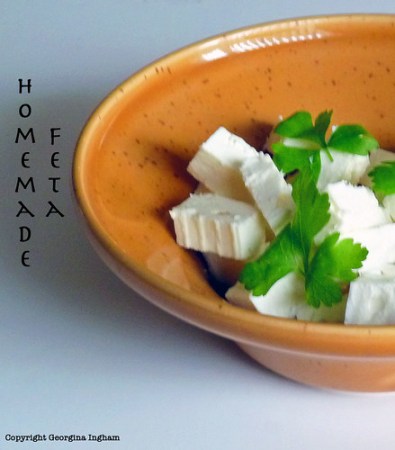 Of course this isn’t real feta cheese, to make real feta cheese, I would need to head off to Greece, employ their traditional methods of cheese making and use the local sheep’s milk. This is then, I suppose my faux feta, or as I’d rather say: my Greek style Feta.

Feta is a milk white brine cured cheese with a soft, friable texture. Excellent for crumbling into salads – feta & watermelon salad is delightful, or diced and mixed with olive oil to be served with a dish of olives as a light snack.

After the inital fermentation both the curds and whey are reheated in combination before draining and a light pressing follow. The cheese is then cut into slabs and immersed in a brine solution, which gives the feta its trademark sharply acidic, pointedly salty flavour.

Feta has been made in much the same way since classical times, in fact, there are records of the cheese being produced in the Byzantine period. Interestingly though it only acquired it’s present name in the 17th century, oddly enough from the Italian word fetta meaning ‘slice’ because of the way it was served.

Enough with the technicalities. Whatever you’d like to call it, it tastes pretty darn good and is well worth trying out yourselves. Sure it’s not exactly a speedy process but it doesn’t require all that much effort, well not as much as say making mozzarella would at any rate.

As for the vegetable stew, well that couldn’t be simpler. A one pot, way of making the most of some great produce. I adapted a recipe for Hortarika Briam from The Best Traditional Recipe of Greek Cooking by Dimitri Haitalis, a book I brought back from the trip to Corfu all those years ago, but it is open to individuality and seasonality. As good at room temperature as it is fresh, steaming from the pot. The original recipe calls for potatoes to be added to the stew, I prefer not to have spuds in a stew so roasted some potato slices separately to have alongside the dish. As I said, the choice is yours. 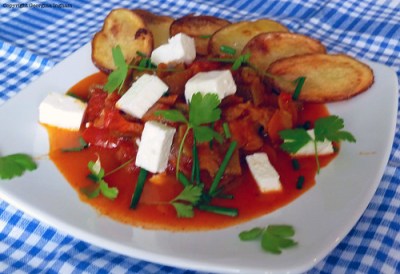