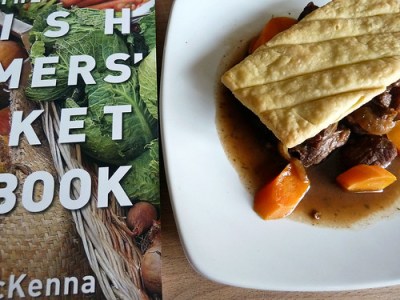 Clodagh McKenna’s Cork Beef Stew from The Irish Farmer’s Market Cookbook is a real favourite of mine and is a frequently made winter warmer of a dish. Generally I’d served a big bowl of it alongside some fluffy mashed potatoes or colcannon and that itself is heaven on a plate. How could it not be? Succulent, tender beef in a thick stout (I use Guinness, but Beamish or Murphy's etc will work perfectly too) based gravy is a fabulous food, if I had to pick a last meal it would be this – you can keep all the fancy delights for another time, thank you very much. Guinness is a stout beer and not only adds a delicious malty flavour to the stew but helps tenderise the meat too.  I used chuck steak but shin beef would also be perfect here and although the recipe said to cook for a couple of hours I left it in the slow oven compartment of my range for around seven hours and it was pure gorgeousness on a plate.

This weekend though, I fancied a change. Instead of a stew, I went for pie! A subtle change I’m sure you’ll agree, but a change all the same. 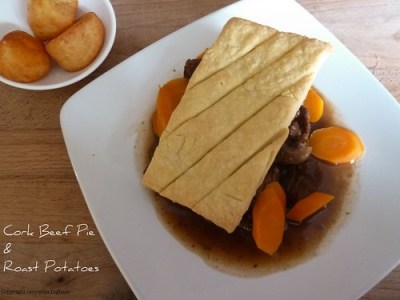 I served the pie with roast potatoes and carrots. There’s something wonderful about the combination of crunchy spud with succulent gravy, I’m sure you’d agree. Carrots? Well don’t a few carrots enhance any pie or stew with their delicate sweetness?

I used a very rich and ‘short’ shortcrust pastry here, but puff pastry would work well also. I’ve gained somewhat of a reputation for this pastry, and until now had guarded the recipe closely, listen carefully now – the secret is extra butter and double cream. Yes really, double cream. The result is melt in the mouth, tender pastry. Go on, give it a try.

Another trick to having really crisp pastry with your pie is to cook it separately. Genius, no?

My favourite way to cook roasties is the ‘Nigella Way’. By that I mean I follow here three crucial steps, I think they make the difference: the first is the heat of the fat (and it’s got to be goose fat)- if it’s not searingly hot, you don’t stand a chance; the second is the size of the potatoes – they need to be relatively small, so that the ratio of crunchy outside to fluffy interior is optimised; and, finally, maybe the most important, dredging the potatoes in semolina after parboiling, then really rattling the pan around to make the potatoes a bit mashed on the surface so they catch more in the hot fat, aiding in that most satisfying crunch. 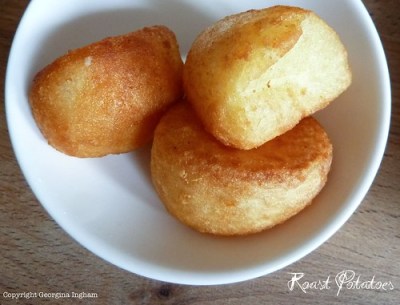