I adore sweetcorn, it is one of my favourite vegetables. Sweet, crunchy, succulent and above all cheerful. It is at its most abundant in the UK as the weather is getting drearier and more autumnal (September into mid October) yet there it is a joyous, bright golden shade to brighten our meals.

These fat, gift-wrapped cobs are now plentiful and will be gracing the vegetable boxes and supermarket shelves alike for a wee while to come. I find it rather a-maizing (sorry, I couldn’t help myself) that corn is technically not a vegetable, but a grass.

Apparently when Columbus reached Cuba in 1492, the native Indians greeted him with ears of corn, which he claimed were “most tasty whether boiled, roasted or ground into flour”. Some believe that Columbus introduced corn to Europe, where the variety of maize grown was largely fed to livestock. To this day, many people still see it as something fit only for cattle. This prejudice is rather surprising, because sweeter maize varieties (what we call sweetcorn) have an almost addictive succulence  – boiled, barbecued or turned into succulent fritters, what is there not to love? 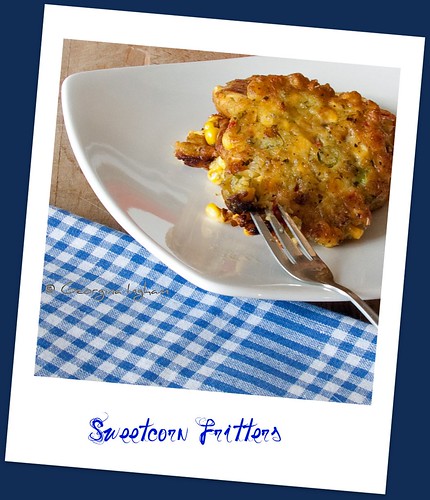 When buying sweetcorn look for cobs with the husk intact. The husk should be green and fresh and conceal fine, silky threads. Kernels should be tightly packed, plump and smaller at the tips than in the middle (indicating young cobs). After picking, the sugars in sweetcorn began turning to starch fairly rapidly. As the point of sweetcorn is that it’s sweet, keep sweetcorn cool and eat as soon as possible after picking – on the same day as purchase where possible. If keeping for more than a day, parboil the corn for a minute (this will help slow down the conversion of sugars) before refrigerating or freezing.

This recipe gives, light, tender fritters with just enough bite and they’re not overly flavoured which gives more scope for the accompaniments.

These fritters are great served with a simple relish as a light lunch or, served as an accompaniment, or to make a more substantial meal from them with crisp bacon and cockles.