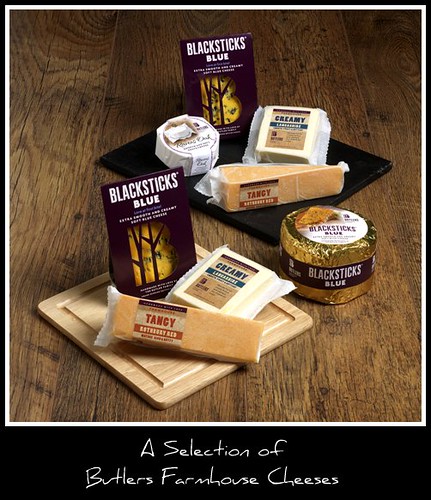 A little while back I was sent a selection of Butlers Farmhouse Cheese to review. As a self confessed cheese-aholic this was one product review I eagerly looked forward to receiving. I wasn’t disappointed.

The Butler family first began making farmhouse cheese in 1932. Run by the third generation of Butlers, the company has become one of the best known names among Lancashire cheese. Based on recipes handed down through the family, Butlers Farmhouse Cheeses are made from milk sourced from local farms and all cheeses continue to be made and turned by hand.

Butlers are award winning cheese producers. They won the Best Territorial (non-cheddar) Cheese Major Category award as well as several Gold medals in the Lancashire and red Leicester Cheese Categories in the 2007 British Cheese Awards and 2 Silver and 2 Bronze medals in the 2008 British Cheese Awards. They now have a Gold, 5 Silver and 5 Bronze Awards in the 2009 British Cheese Awards and have been awarded a Major Category Award for the Best Territorial (non-cheddar). As well as regional varieties such as Lancashire, Double Gloucester and Red Leicester they produce Blacksticks Blue and a range of fresh and brie style cheese from goat, cow, sheep and buffalo milk.

Simon Rimmer certainly wasn’t wrong when he proclaimed “Blacksticks Blue is undoubtedly the daddy of all blue cheeses. It starts with the nose, continues through the taste & texture, & finishes with an after taste of shear blue cheese. Heaven!”. Even my blue cheese hating Dad enjoyed it.

Blacksticks Blue is a new soft, blue-veined cheese from Butlers Farmhouse Cheeses. Made solely with pasteurized milk from the family’s cows, the cheese is matured for eight weeks, during which it develops an amber hue and, says Butlers, a smooth but tangy flavor. The name Blacksticks comes from a collection of tall chestnut trees on the Goosnargh-Chipping border, which is also the name given to the family’s restaurant.

Not only is Blacksticks Blue delicious but it’s good looking too. Blacksticks Blue is a beautiful sunset colour from annato being added to the milk during the cheese-making process with thick, dense blue veins running through it. It is creamy and soft with a well rounded flavour, similar to a Shropshire Blue but not as strong as a Stilton.

The crumbly Lancashire was my favourite of the selection, being fresh and almost tart in flavour. It made the most gorgeous accompaniment to piccalilli and a doorstep chunk of freshly baked bread.

The youngest of Butler’s Lancashire cheeses, Crumbly is matured for up to six weeks, having been handmade at Inglewhite Dairy in Lancashire. With the texture reflecting its name, the taste is mild and slightly sharper making it ideal for crumbling into salads and sandwiches.

As for the Red Leicester, well first let me confess I’m not much of a fan of ‘red cheese’ – too many memories of chunks of ‘plastic’ red stuff in school lunches, in case you were wondering – but, this was beautiful. Full flavoured, yet still sweet and mellow bellied on the tongue. It was made gorgeous cheese toasties, a delicacy I have acquired quite a taste for these last few weeks since the days started becoming duller and colder.

As you can see from the photography, the cheeses would make a brilliant present for any cheese lover and the the truckle of Blacksticks Blue would look stunning as a centrepiece to any cheeseboard, festive or otherwise.

Their ranges of cheese are available at a wide range of supermarkets and independent retailers as well as via Butlers Farm online store.