Firstly, I think I need to say sorry to my loyal readers. I’ve been incredibly busy of late and as such this place has suffered, for that I am sorry but I suppose there are times when life just gets in the way of blogging. 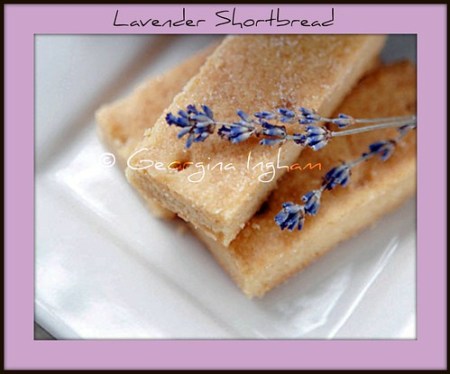 I’ve been meaning to blog about this crumbly lavender shortbread since the early summer months.

I’ve grown rosemary and lavender for several years but until recently have only used the rosemary in culinary ways. The lavender plant is so beautiful when it’s in bloom and though I’ve come across many recipes containing lavender I haven’t much used it.

Shortbread is one of my favourite nibbles to have with a good cup of tea. I like mine to be relatively pale in colour, but several Scottish recipe books I own say to ‘brown’ it. One rule I do always obey and implore you to do the same is always to use good quality butter – if you wouldn’t slather a slice of bread with it, don’t bake shortbread with it!

The story of shortbread begins with the medieval “biscuit bread”. Any leftover dough from bread making was dried out in a low oven until it hardened into a type of rusk: the word “biscuit” means “twice cooked”. Gradually the yeast in the bread was replaced by butter, and biscuit bread developed into shortbread.

Shortbread was an expensive luxury and for ordinary people, shortbread was a special treat reserved just for special occasions such as weddings, Christmas and New Year. In Shetland it was traditional to break a decorated shortbread cake over the head of a new bride on the threshold of her new home. The custom of eating shortbread at New Year has its origins in the ancient pagan Yule Cakes which symbolised the sun. In Scotland it is still traditionally offered to “first footers” at New Year.

Shortbread has been attributed to Mary, Queen of Scots, who in the mid 16th century was said to be very fond of Petticoat Tails, a thin, crisp, buttery shortbread originally flavoured with caraway seeds.

There are two theories regarding the name of these biscuits. It has been suggested that the name “petticoat tail” may be a corruption of the French petites gatelles (“little cakes”).

However these traditional Scottish shortbread biscuits may in fact date back beyond the 12th century. The triangles fit together into a circle and echo the shape of the pieces of fabric used to make a full-gored petticoat during the reign of Elizabeth I. The theory here is that the name may have come from the word for the pattern which was ‘tally’, and so the biscuits became known as ‘petticoat tallis’.

Shortbread is traditionally formed into one of three shapes: one large circle divided into segments (“Petticoat Tails”); individual round biscuits (“Shortbread Rounds”); or a thick rectangular slab cut into “fingers.”

Adding a little lavender just gives a gentle fragrance, trust me, it isn’t overly floral or soapy. Well it isn’t unless you add too much lavender – go easy with it, you can always add a little more the next batch you make.