Camembert is one of my favourite cheeses.  Soft, oozing, creamy goodness; what is there not to love? 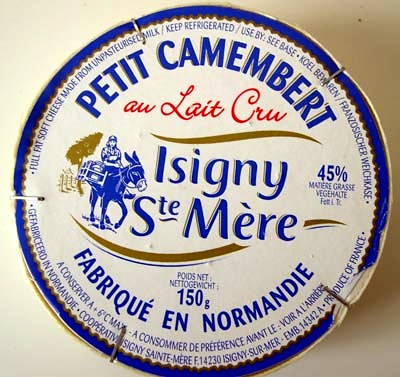 The Camembert is probably the most famous and the most popular French cheese in the world. It originated in the region of Normandy, Northern France.

According to legend Marie Harel created Camembert in 1791 during the French Revolution, helped by a priest from the Brie countryside. Following this Camembert soon became the most famous cheese of Normandy and made the fortune of many dairies in the Auge region.

Sponsored by Napoleon III, Camembert was packaged in a poplar wood box at the end of the XIX century and adorned with a famous label. The cheese was sent to Paris, as well as eastern of France and all over Europe where it was soon copied. Camembert has also often been associated with the beret and the baguette as one of the supposed symbols of the French people. This is in part due to the fact that the Camembert cheese once again made history during World War I (1914-18) when it was one of the components of the iron rations given to French soldiers.

Camembert is a soft cows’ milk cheese with a furry white rind speckled with beige, and a creamy, pale interior which becomes increasingly yellow as the cheese matures. When fully ripe, Camembert has a pungent, strongly-flavoured and runny interior somewhat similar to the milder Brie. Unlike Brie, which is produced in large flat wheels, Camembert is made in individual cheeses about 11cm in diameter.

Camembert served with some crusty bread or even some crackers is a fabulous lunch, add in a little salad and some grapes and it becomes heavenly. But, for an incredibly easy but impressive starter or a light dinner baked Camembert is my dish of choice. 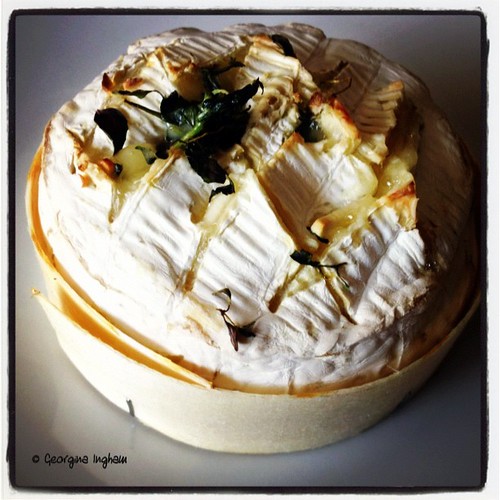 As I’m attempting to follow a low carbohydrate diet at the moment – blogging/food writing is not good for the waistline you know – I decided not to serve the traditional crusty bread alongside the molten Camembert.  Instead I served roasted asparagus spears, char-grilled courgettes and peppers, and some roasted onions quarters. Oh and the essential glass of wine. Happy days!