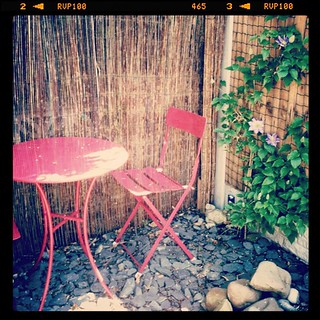 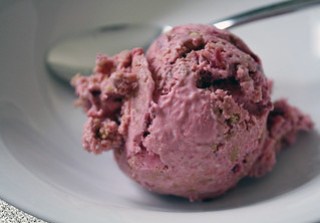 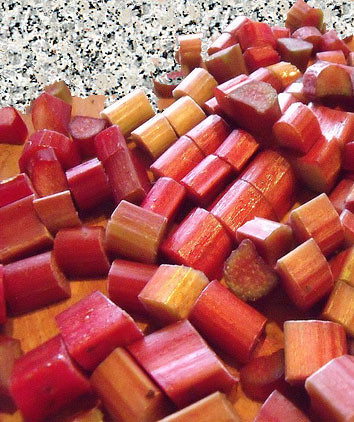 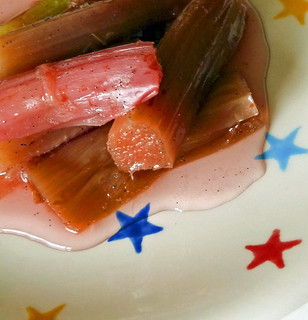 The resulting colour of your ice-cream will vary depending upon the rhubarb. I've made it where the ice-cream has been a vivid pink and where it has been a creamy colour. An alternative would be to blitz the rhubarb it in the food processor and swirl it through the ice-cream, to give it a rhubarb ripple effect.
Ingredients
Instructions
1. Begin by preparing the rhubarb.
2. Preheat the oven to 160C or the equivalent.
3. Trim the leaves from the rhubarb and wash the stems, then dry them and cut into short lengths.
4. Arrange in a roasting tin just big enough to take them in a single layer.
5. Dredge with the sugar and cover with a lid or foil.
6. Bake for fifteen minutes and remove from the oven, (this timing is for rhubarb up to broom handle thick.
7. Very thick stems may need another five or ten minutes).
8. The rhubarb will still be slightly "al dente" but awash with pink syrup.
9. Leave until cool, still covered, by which time the rhubarb will be perfectly soft.
10. While the rhubarb is cooling, make the crumble.
11, Turn the temperature of the oven up to 180c.
12. Put all the ingredients into a large bowl and rub together with your fingertips until you have a crumbly dough.
13. Squeeze the mixture in your hand to form clumps, the crumble these onto a large baking tray and spread out evenly.
14. Bake for about 20 minutes, stirring halfway through, until golden brown and crisp.
15. Leave to cool completely before transferring to an airtight container.
16. Once the rhubarb and crumble are cold make the ice cream.
17. Whisk the cream and condensed milk together until soft peaks form.
18. Fold through the rhubarb (use a slotted spoon and reserve the syrup) and a couple of handfuls of crumble mix, and then fill 2 x 500 ml containers, scatter with a little more crumble, and freeze for 6 hours or overnight (if you can wait that long).
19. Serve straight from the freezer, drizzled with the reserved syrup (optional).
Details
Prep Time:30 minutes
Cook Time: 35 minutes
Freezing Time: 6 hours
Total Time: 7 hours 5 minutes
Yield: 1 large crumble