Don’t you just hate menu’s and foods (apart from baby food) specifically for children? I certainly do, why not just serve smaller portions from the regular menu? I’m not yet a mother but I know (yes I’ll probably be back here in a few years retracting my words) that I’ll cook a meal for the family and while I may reduce the level of spice added to some dishes I won’t be serving up low quality foods from the supermarket freezer aisle such as chicken nuggets and chips while I dine on pasta with meatballs for example.

That’s partly the reason I have no objection cooking meals (or sweet items come to that) for the family from recipe books aimed at food for kids.

The lovely Heather over on Violets Pantry posted a recipe for amazing brownies a long while back and I have to confess today is only my second attempt at baking them. Shocking behaviour as they are so delectable and considering that brownies are my favourite type of cake, providing they are made well – a dry crumbly brownie is one of the ultimate culinary crimes.

The recipe comes from a book on finger food for toddlers and as such the brownies would normally be quite thin and small portions; to get round the problem of having to find a small brownie pan I decided to make them in heart shaped silicone cupcake moulds, giving them an ideal portion size.

Making them in cupcake form also gives me scope to enter one of the great blog competitions out there – Sugar High Fridays which this month is being hosted by Fanny at Foodbeam. I do love taking part in these things, not for the competition factor so much as the inspiration and creativity they endow and of course the fact that they ‘force’ me to bake.

Heather recommends dotting the mix with white chocolate chunks but I decided to use cubes of Baci chocolate brought back from a lovely holiday in Assisi. One of Italy’s most famous chocolates has to be the Baci Bar, a semisweet chocolate bar with a rich hazelnut filling. It was first invented in 1922 by Luisa Spagnoli as a labor of love. She fell in love with Giovanni Buitoni and would often send him her own chocolate creations as a gift of her love. Rightfully so, in Italian Baci means kisses. What could be better than a heart containing a kiss? A great idea for Valentines day too. 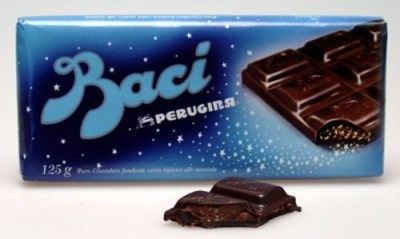 While hot the chocolate oozed seductively from the brownie when cut open but once cool it formed a smooth truffle like centre, the perfect backdrop to gooey, sticky, deep cocoa flavoured brownie. 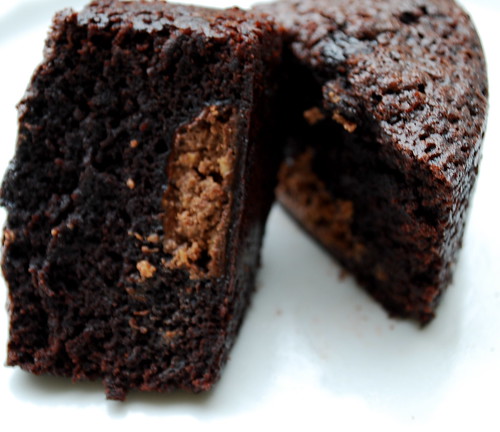 Will I make them again like this? Just try and stop me