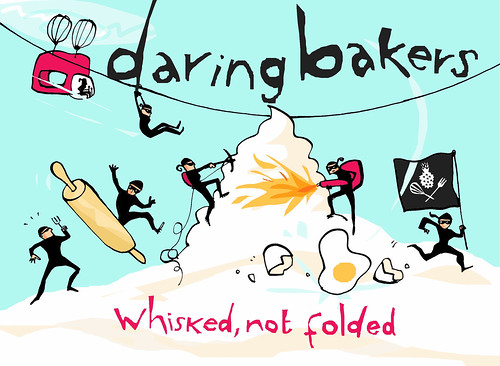 There really is nothing to fear about choux pastry (honest), even though it’s the pastry that even the most confident of cooks seem to worry the most about. I think that’s because the choux method is so unlike any other pastry method, no rubbing in, no rolling out, etc etc, the only one it comes close to is hot water pastry although in taste and texture they certainly are not so similar at all.

Choux pastry is very easy to make providing you have either very strong arm muscles or an electric free standing mixer, I don’t have such strong arms but I do love my Kitchen Aid Artisan (have I said that before ?

) and it’s such a delight to eat too, so light and airy. My perfect way to eat choux is in the form of eclairs, but since my local bakers make such delightful ones I don’t tend to bake them that often.

Imagine my delight when Meeta and Tony, announced that the August Daring Bakers challenge was going to be Chocolate Eclairs I was ecstatic. The only down point was that I don’t own the book the recipe came from and I can’t find it to buy at a reasonable price, I mean who wants to pay £50 plus for a book with an rrp of less than half that? Oh well I’ll just have to continue hunting.

Eclair is the French word for lightning. It is believed that the pastry received its name because it glistens when coated with the traditional glaze. Little is known about the origin of the eclair, other than it is known to have originated in France around the turn of the nineteenth century. Many food historians speculate that eclairs were first made by Marie-Antoine Carême a famous pastry chef for the French royalty of the period.

The challenge was great fun, lots of small parts to the recipe, but nothing too taxing and it could all be spread over a couple of days; not that I did that of course, in keeping with my normal habit I did everything in just under three hours, crazy or what? Maybe that was what made it ‘daring’ as apart from the actual slicing of the eclairs everything else was a breeze to complete.

For experimental purposes only I decided to leave the butter out of the pastry cream filling, it worked out just fine so that’s 40g of butter out of the equation. Not so much really but does it mean I can eat another eclair? I hope so because I did anyway.

Slicing the eclairs was a bit of a nightmare simply because the piping tip I used was too small to effectively pipe the choux pastry into decent sized eclairs and rather than give up and change to freestyle piping (that is without a nozzle) I (in a rather pig headed manner) continued nonetheless.  Despite the recipe given by Meeta stating to use a plain tip I decided after reading the relevant chapter in The Secrets of Baking: Simple Techniques for Sophisticated Desserts

(Sherry Yard), to use a star tipped nozzle as Sherry states this gives ultra fancy eclairs. Well it might if you used the right size! I imagine she means to use a nozzle aimed at piping potatoes etc not icing and it’s the latter I used, idiotically this never occurred to me before the eclairs were baked. Everyday we learn something new and that is my learning curve of the day 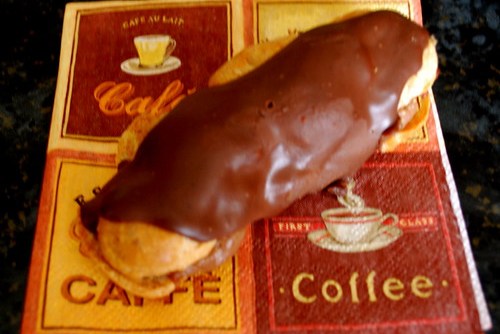 I didn’t just make chocolate cream filled eclairs (the base recipe given) but Caribbean cream puffs filled with coconut rum, lime and pistachio creme patisserie which I topped with a white chocolate version of the glaze specified and scattered with lime zest. It seemed quite apt to pick a filling with a Caribbean background given that so many of the countries there have had a strong link to France throughout their history. 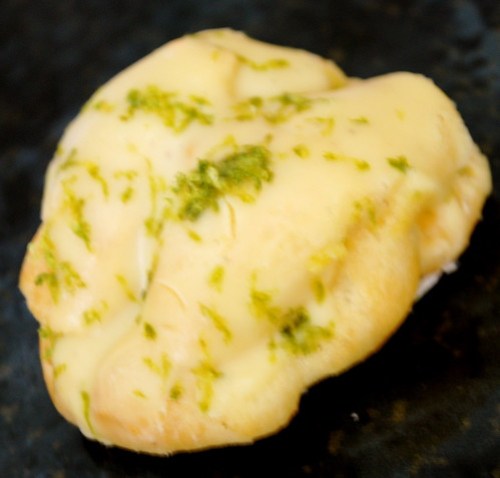 The cream puffs were much more refreshing than the eclairs making them perfect as an afternoon nibble with a glass of home made lime or lemonade.

Although the chocolate ones were grabbed and eaten first, it didn’t take long for the Caribbean version to be snaffled up either. They all more than made up for the lack poor appearance with the great taste.

Once I’d completed the Daring Bakers challenge I set myself another, what to do with the leftovers? Five egg whites and a large amount of Caribbean pastry cream & glaze? Well to keep the French theme there seemed only one direction to travel; to macarons. Yes macarons not macaroons, they are so different yet when I mentioned them to others and labelled them up it was assumed I’d made a spelling error! Basically a macaron is a sandwich of merrangue discs filled with a flavoured creme patisserie and a macaroon is an egg white based cookie similar to amaretti biscuits, a more detailed description can be found here. Who would have though one little “o” could cause so many problems.

So on to another learning curve, macarons aren’t a native of France! They were brought to France from Italy somewhere around 1533 by Catherine di Medici and her pastry chefs. Macarons gained fame in 1792 when two Carmelite nuns seeking asylum in Nancy during the French Revolution baked and sold macarons in order to support themselves, thus becoming known as “the macaron sisters.” The macarons they made were a simple combination of ground almonds, egg whites, and sugar. No special flavors. No filling. Just 100% cookie.

Crisp yet chewy discs of pistachio macarons made a delightful partnership to the Caribbean cream, they really were a match made in Heaven. Ideally the I should have blitzed the creme patisserie to a smooth paste in the food processor for the macarons but I just couldn’t be bothered and anyhow they tasted great.

As a final point, please excuse my lack of photographs, somehow I managed to delete them before uploading them to the computer, what an eejit!