Julie Le Clerc is one of my favourite food writers, so imagine my delight when a copy of the New Zealand Woman’s Weekly Julie Le Clerc Magazine landed on my doorstep courtesy of the lovely New Zealander Linda.

It’s not all that often that I cook from food magazines, or any magazines in general really and I really don’t know why because there are so many wonderful recipes to be found in them. I think it has something to do with my inability to file them into meaningful order and bookmark recipes to try, instead they end up piled next to the bookshelves and very rarely are they sifted through again. This magazine has gained higher accolade though and is now nestling amongst the bookshelves rather than next to it, meaning it has a high chance of being used over and over again.

There are so many delightful recipes in the magazine, almost all accompanied by the kind of photographs that make your mouth water and the hunger pangs start as you sit down to read, always dangerous as the tea and biscuits are never far away in one of those moments.

Rather spookily one of the recipes was for Thai Beef Curry, spooky because on Monday I got some steak out of the freezer ready to cook a beef curry but it hadn’t defrosted so I left it to use on Tuesday and low and behold this lovely recipe was available to use then – must’ve been fate.

There is something about Thai curries that makes them especially warming, comforting, and sense awakening, even though they’re mostly quite light to eat; this derives from the thinness of the coconut milk based sauce making them almost soup like in consistency and from the array of spices used to create such a vibrant and fragrant mix.

This one is no different – being fragrant and sumptuous it can be made anywhere from mild to red-hot, depending on how much spice paste you add. For ease I used a pre-bought spice blend from The Spice Shop but you could use a home made one if you prefer (they’re great fun to make too especially by hand in a pestle & mortar).

A kaffir lime leaf is called for in the curry but if you don’t have any don’t worry about it, they are available dried in most supermarkets now and fresh from Asian stores and The Spice Shop, for storage I keep them in the freezer and just pop them into the dish from frozen.

The ideal serving partner for Thai curry is jasmine rice, fragrant, lightly perfumed but robust enough to stand up to the spiciness of the curry, while being gentle enough to act in a cooling manner too.

The only thing missing was some fresh coriander leaves scattered over at the end but unfortunately my little plant had died so I didn’t have any to hand, no major disaster by any means.

Another midweek staple found and most definitely bookmarked, this recipe will not be escaping. 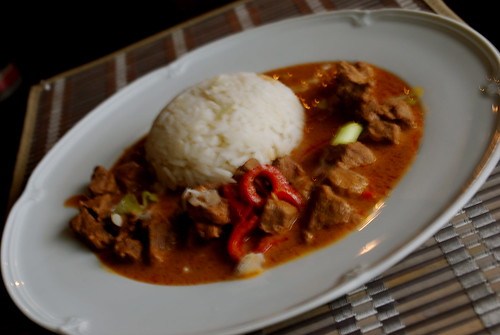