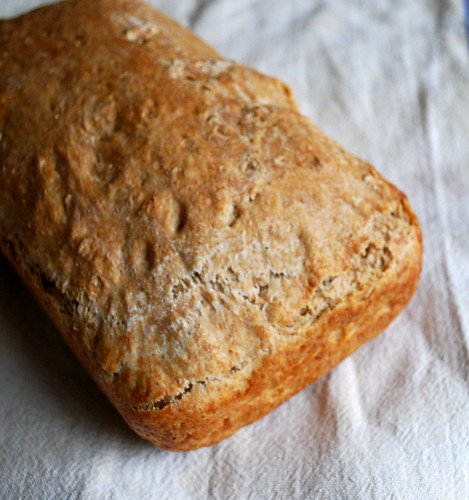 The bread followed a no knead recipe, given to me by Gail a friend on a food forum I frequent, and was made using spelt flour. Spelt flour is an ancient relative of modern wheat and the spelt grain, (triticum speltum) was widely grown by the Romans however it was originally grown in Iran around 5000 to 6000 B.C. It is a highly nutritious grain, being higher in protein than wheat and it is also thought that this protein is easier to digest too.

I used half wholemeal and half white spelt as I didn’t want the loaf to be too dense or too highly flavoured, sometimes all wholemeal can be a little too overpowering, dependent on what it'll be served withl. The balance worked perfectly, giving a slightly nutty flavoured bread with a lovely soft, close texture. It couldn’t be said it was a light loaf but it wasn’t heavy either, does that make sense?

Ahh you’ll just have to bake it yourselves.