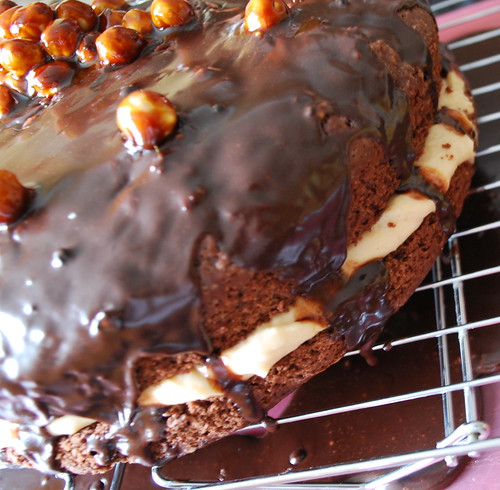 The other day I felt so desperate to bake and only a cake would do but I hit on a slight (or seemingly so) problem, I had no eggs at all in the house and I really didn’t want to have to go out.

Not one to be put off so easily I resorted to searching the trusty Google which managed to show hundreds of pages of results for eggless cakes, one however stood out.  Maybe it was all the chocolate mentioned in the recipe or maybe it was because I trusted the recipes source – the master chef Giorgio Locatelli; I know I wax lyrical about this man every time I post about Italian food or his book but he really is a great chef and his recipes are pure gorgeousness on a plate; one day I will eat in his restaurant, I know I will.

Giorgio developed this cake for his daughter Margherita (who has a severe egg allergy amongst others), hence the Italian name for this cake is Torta di cioccolata alla Margherita.

I baked the cake in two 18cm sandwich tins rather than the springform mentioned because I felt lazy and I knew the cakes would cook and cool faster, I also didn’t want to be slicing the cake in half.

Another alteration I made was to add a couple of teaspoons of amaretto flavoured coffee (Boaters brand). This added a lovely rich nutty taste to the cake, with only a hint of the coffee coming through. To enhance the element of hazelnuts within the cake I used a hazelnut cream filling (simply whipped double cream with praline paste folded through) and topped the cake with caramelised hazelnuts too, all in all a nutty extravaganza. 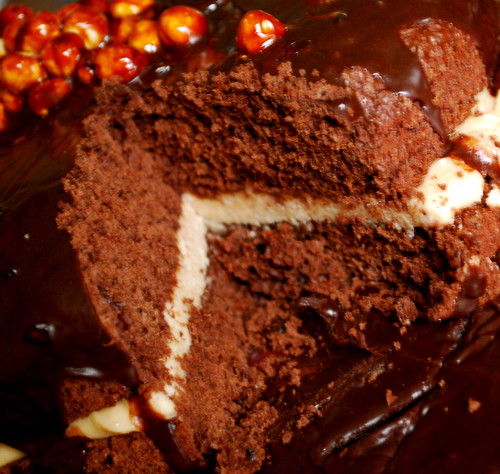 The cakes didn’t rise as much as I expected, but, with the omission of eggs it really wouldn’t rise so much and I think I was expecting far too much really and to be honest it didn’t matter one bit as although the reduced rise led to the cake being dense it wasn’t overly heavy and it did stay so lovely and moist.

The flavour of the cocoa really shone through too, I used Valrhona cocoa as I knew its flavour would be vital to the finished result.

The cake made a great dessert cake as it was really rich and unctuous, the kind of cake people always ask for a small slice of thinking it will be too over the top but end up going back for more. It would of course be great with a cup of coffee for afternoon tea too.

I would definitely make this again but in a smaller size (such as mini cakes or cupcakes) or if feeding a crowd as it really doesn’t last long, 48hrs at the most as it dries out so quickly.

Another bonus of course is that the cake is actually vegan and could be made with gluten free flour too, a perfect cake for those with allergies and one that is so quick to whip up too.