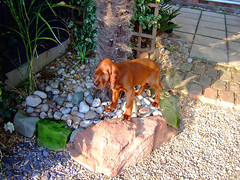 Murphy our Irish Setter has always been rather picky about his food, he must take after his owners, haha. So many, many puppy foods were bought, tried and mainly not eaten.  A great worry for us, especially when at his age he’s growing so rapidly and his diet would have great impact on his health in later years.

When Murphy was around six months old we realised he had some kind of an allergy to the dry dog food we’d been feeding him, I won’t go into the details but it wasn’t pleasant for the poor little mite. After a little detective work I realised it was the wheat/gluten in his biscuits, he was fine with corn based biscuits, although he wasn’t keen to eat them. 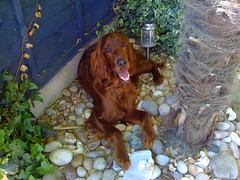 What to do? Well after a little research using the ever helpful Google I decided to go down a home made food route for him.  I ordered a couple of books from amazon and have had much success.  The meals are wonderful and include such delights as chicken with eggy rice, lasagna and beef stew. Needless to say Murphy loves these meals, which with a little thought can all be adapted to suit his gluten allergy needs.

It also pleases me that I can provide him with a healthy, free-range and organic diet containing minimal amounts of additives etc.

Also included are plenty of recipes for ‘treats’ such as cookies and savoury cakes. Yesterday I made him some carrot and cinnamon cookies. Just for scientific purposes you understand I had to try one and they’re pretty good and they made one Setter puppy very happy indeed. 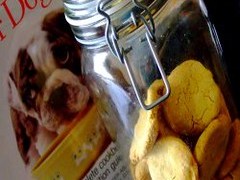