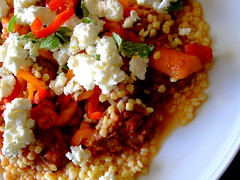 Apologies firstly for the corny title, but hey it’s good to have a bit of fun isn’t it and poetic licensee and all that.

Last night we had Nigella Lawson’s Greekish Lamb Pasta from How to Eat: Pleasures and Principles of Good Food

, (which, side tracking here, is actually shown in the Nigella Bites TV series) although I’d cooked it the night before to let the flavours intensify and the meat become even more mouthwateringly tender.

How to Eat: Pleasures and Principles of Good Food

(Nigella Lawson) is an absolute culinary bible of a book. Not only are the recipes outstanding but Nigella’s way of writing is superb; she brings alive what it is not only to cook but to eat in this book. Even though there are no photographs in the book it’s not a down point, sure with all the wonderful prose they’re not missed at all.

The stew is deep and earthy, but light enough to capture the notion of summertime eating, however, I dare say it would be rather too warm in many parts of Greece to eat this stew in the height of summer.

The secret is to make sure the meat is browned well, the onions are cooked so slowly they’re almost melting and that the stew itself is cooking long and slow; much slower in fact than the original recipe states. Nigella recomends cooking for 2.5 hours but I guess I cooked mine for nearly eight hours in the slow oven of my range, then reheated on the day by sitting the stew pot on top of the hob and simmering for an hour.

Whatever you do don’t forget or decide to skip the feta cheese, it really livens up this meal and brings a salty, sweet tang. Through the feta I mixed parsley,oregano, mint and lemon zest which really was delightful.