(Atul Kochhar) has been sitting on my bookshelf for over 12 months now and I’m most ashamed that until today I hadn’t cooked from it.  That’s an awful shame as the book is full of mouthwatering recipes from across the whole of India, with many enticing photos too.  As promised by the books title the recipes are relatively simple and easy to cook, providing you have a well stocked pantry and spice rack.

To begin my journey through this book I decided to cook from a variety of regions within India – Kheema Mattar from North India, Pappa Dosakai from South India (Andhra Pradesh and an adapted Aloo Masala from North India (Punjab region).  All of these dishes are familiar on most good Indian restaurant and take out menus but there is nothing like the home cooked version.

Kheema Mattar is generally a slow cooked minced lamb and pea ‘dry curry’ which is delicately spiced and of medium heat, but the version I used recommended a relatively quick cooking time, which I more than doubled preferring to stick to the more traditional slow cooking route. 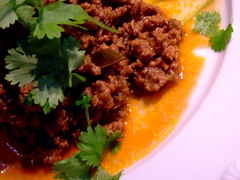 Pappu Dosakai is a pumpkin and lentil dish, well spiced and fragrant, offset by creamed coconut. A real taste sensation, with the heat of the chili, fragrance of the spice blends and sweetness of the coconut; a dish not to be missed. A feast for the eyes as much as the palate, as the colours are so pretty – oranges against black, so appetising. 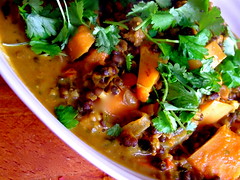 So to the potato dish, well that I kind of created and is basically spicy sweet potatoes which are roasted in ghee. Doesn’t sound so exciting does it? Well look guys you’ll just have to trust me here, they’re out of this world.  Melt in the mouth potatoes brought to a new level with an exotic array of spices, adjust the quantities to suit your individual preferences. 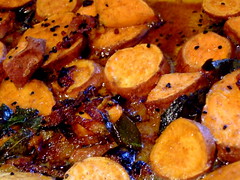 I’d always rather naively thought that the regions of India would be well versed in the cuisine of the other regions, but it appears not.  My friend Jincy is from Kerala and she was totally unaware of the food from the Punjab for example, cuisine is very much focused around the local fare and not a great deal of thought is passed on other types according to her.  Since she moved to the UK she says she has tried many more varieties of Indian food than she’d ever dreamt possible.  Why am I telling you all about Jincy? Well it’s simple really – it’s her recipe I used to cook the accompanying rice dish.

What’s so special about Jincy’s rice then I bet you’re all wondering.  It’s special because twice-fold, one because it’s a great recipe and secondly because it’s a generational recipe, handed down through her family from mother to daughter for generations. 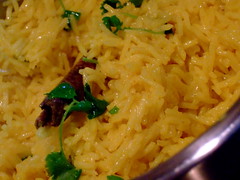 The rice (basmati) is fragranced with cardamom and cloves, echoing the scent of the kheema, and cooked in a coconut milk based liquor, giving a sweet, creaminess which balances the heat of the kheema well and mirrors the delicate nature of the lentils.

I also served some paratha and naan breads with dinner but I have to confess I didn’t make them, I cheated and bought extra when I last had take out and froze them ready for a home cooked curry night like this. I simply dampen and reheat the naan in a hot oven and the paratha in a hot but dry frying pan. 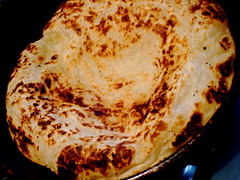 You might be wondering if serving bread too is a carbohydrate overkill, with the rice, potatoes and lentils but as they’re all served in small portions they complimented each other excellently.

With the exception of the potato dish the meal could be cooked in advance and then reheated.  This would be ideal for the kheema whose flavours will be enhanced by this, add the peas at the reheat stage though or they will become rather mushy.

The meal took me about an hour to prep and the same in cooking time so altogether a fast and simple affair, perfect for lazy or busy bee kind of days.