My first entry to Bread Baking Day a great monthly event aiming to challenge bloggers in their bread baking abilities. The current theme is hosted by Baking A Sweet Life and is focussed on breakfast breads, and what could be better than croissants?

I just love croissants for breakfast or a mid morning snack, with a latte to dunk them into.  No jam or other adulterations required, thank you. 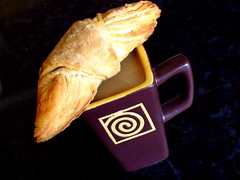 As everyone knows the croissant, is the esteemed Parisian pastry that has seen different guises. It could be filled with chocolate, ham and cheese, to name just a few. Well it’s not actually of French origin, according to Larousse Gastronomique: The World’s Greatest Cookery Encyclopedia

“Croissant…This delicious pastry originated in Budapest in 1686, when the Turks were besieging the city. To reach the centre of the town, they dug underground passages. Bakers, working during the night, heard the noise made by the Turks and gave the alarm. The assailants were repulsed and the bakers who had saved the city were granted the privilege of making a special pastry which had to take the form of a crescent in memory of the emblem on the Ottoman flag.”

Croissant are actually look quite straightforward, just time consuming as it is two day job, but they’re actually rather tricky to get right.  As Dan Leapard points out in Exceptional Breads: Baker & Spice they were once considered the gold standard when checking out a pastry chefs abilities.

Considering this was my first attempt at baking them and I can’t believe how well they turned out.  They’re so crisp, feather light and flakey. Not too bad looking either eh? Although I do feel the layers are a little too distinct and should be more evenly blended; a good enough reason to practice more croissant baking and eating too I reckon. 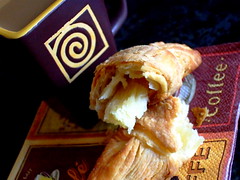 A diagramatic method can be seen here, although I used the recipe from Exceptional Breads: Baker & Spice (Dan Lepard & Richard Whittington).