Having spent the morning with my dad creating a Mediterranean oasis of a garden in what could only be described as Mediterranean weather, I wanted food to match. 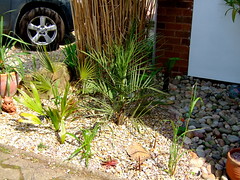 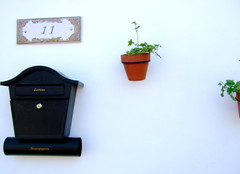 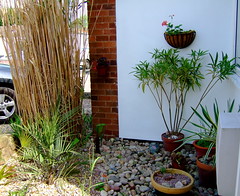 Yes everything is looking a little sparse at the moment, but it won’t be long before the flowers are all in bloom, what a site to behold it will be.

With some lovely Whitby cod in the fridge fresh from the fishmonger yesterday and vegetables fresh from the market I set to creating a Spanish inspired meal.

Cod is a white, light textured flakey fish with an ability to stand up to bold flavours, however, I didn’t want to do anything too strongly flavoured so as to make the most of the fish.  I decided to simply pan fry the fish in butter, giving a lovely golden colour and slightly crisp, nutty edge to the fish.

To accompany this a sweet and sour red pepper relish and Canarian style new potatoes. I remember eating a very similar dish to this when on holiday in a remote area of Tenerife as a young teenager, it was one of those dishes that just stuck in your mind, one to never forget.

The pepper relish is so simple yet so effective, simply onions and red peppers cooked gently in olive oil, then dressed well warm with sherry vinegar and really good quality Spanish olive oil. 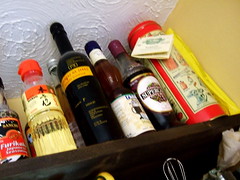 Papas Arrugardas (Canarian potatoes) are potatoes cooked in salt water (sea water is traditional) until the skins are dry and wrinkled, doesn’t sound so appetising does it? Do take my word for it though, they are stunning. Traditionally they are served with a mojo sauce however I decided against this, not wanting the piquancy of this sauce to interfere with the rest of the meals components.

The sweet, sour relish really brought the creamy fleshed fish alive, giving a little piquancy, which when paired with the salty, fluffy potatoes really did give a feeling of completeness. 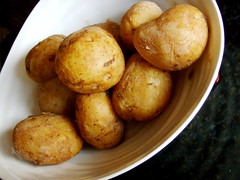 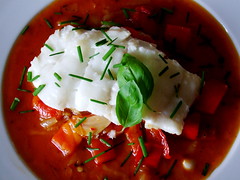 Adding a dash of sweet paprika, as you can see above, gave the sauce a gorgeous ruby tint, which with the sheen of the olive oil, glistened beautifully.  Very appealing to eyes and tastebuds alike.

The meal went down a storm, to quote my mother “another culinary masterpiece” and my dad “a real taste of the Med”; needless to say I’m very very pleased.

I’m so glad I had my notebook to hand as this is a recipe I want to recreate over and over again.