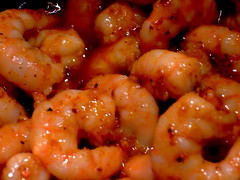 Prawns feature frequently in tapas dishes, I guess it’s because they’re very popular and quick to cook to order. They’re certainly one of my favourites, especially served in a ‘pil pil’ style.

Tapas refers to the small plates or mouthfuls of food served along side drinks in Spanish bars.

The original tapas were the slices of bread which sherry drinkers in Andalusian taverns used to cover their glasses between sips. This was a practical measure meant to prevent fruit flies from hovering over the sweet sherry. But soon, enterprising bartenders were putting small snacks on the bread, and the lowly tapa (from tapa derived the verb tapar, “to cover”) became as important as the sherry.

So how did tapas come about? Well some authors assert that the tapa was born when, due to an illness, the Spanish king Alfonso the 10th, the Wise, had to take small bites of food with some wine between meals. Once recovered from the disease, the wise king decreed that no wine was to be served in any of the inns in the land of Castile , unless accompanied by something to eat, so giving rise to tapas. Oh and how glad am I that it did.

The style of ‘pil pil’ means to sizzle with chilli and describes how the prawns are served in a hot dish of sizzling olive oil speckled with paprika and chili flakes. It is a relatively spicy dish but the flavour of the prawns, olive oil and garlic really comes through, not at all overpowered by the chilli.

I served this with a side salad today, but all you really need is a big chunk of rustic crusty bread to mop up the olive oil. 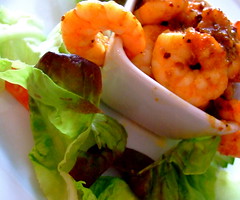