Biscuits for Soldiers as they were originally known are now more frequently referred to as ANZAC biscuits. ANZAC refers to the Australian and New Zealand Army Corps and these biscuits came about during World War I, the name change occurred after the Gallipoli landing.

The recipe is a very simple one and was created to ensure that the biscuits would travel well and be a good reminder of home. This was essential as any food they sent to the fighting men had to be carried in the ships of the Merchant Navy. Most of these were lucky to maintain a speed of ten knots (18.5 kilometers per hour) and most had no refrigerated facilities, so any food sent had to be able to remain edible after periods in excess of two months

Basing the recipe on Scottish rolled oat biscuits proved very worthwhile as no egg was required to bind the biscuit dough together, they instead relied upon golden syrup to do this job.  Nowadays the biscuits are known to be soft and chewy, they weren’t always so. Instead they were known to be a little like rock cakes – whether down to the recipe or because of the traveling is an area of contention. 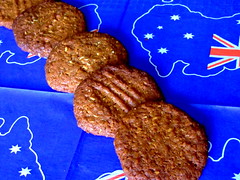 As today is ANZAC day I decided to go ahead and bake these delightful biscuits, and what better recipe to use than a Bill Granger one.

They’re a real delight to eat being hardy, sturdy and chewy; and a delight to make too, so simple and quick – just stir melted butter and golden syrup through the dry ingredients spoon onto a tray and bake.

So good with a nice steaming mug of tea, and yes it has to be a mug not a cup, these mouthfuls of yumminess are just not dainty enough to grace cup and saucer.

A big thank you to the lovely Jilly from Hornsby for sending me the Australia napkins, they’re so apt for a biscuit like this.